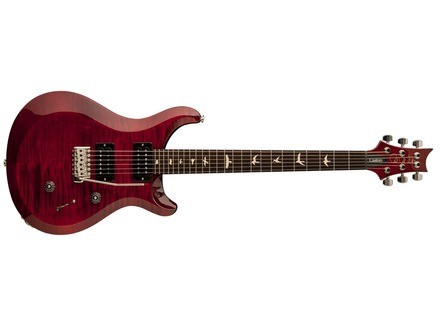 S2 Custom 24, Other Shape Guitar from PRS in the S2 series.

bm64's review (This content has been automatically translated from French)" A good tool, simple and effective"

It's PRS, at lower cost, but the PRS. Easy handle end, somewhere between Fender and Gibson. It is light and access to the treble is carefree. It's really very playable. Electronic side is simple: a volume and a tone with a three-position switch (rotary switch to some other PRS did not like me much) Fender style I also prégère the toggle switch. A split pickups is expected and is quite impressive, much better than some of split humbuckers on which I had the opportunity to play. But it is a habit for PRS ...
For those familiar with the brand, compared to other models, it's really cheap, even spartan, and this is, for me the point of the thing: the essence of a versatile and easy skyscraper in all sense of the word. But connotation rock anyway ...
8/10

In fact, I tried this guitar by accident. I have not always kept good memories of PRS: rotocontacteur not for me, price not given, a little precious, twee, a lack of personality in some models ... and then a colleague whose group the Custom 24 is detuning to outdo despite all possible settings. Fear also damage a beautiful skyscraper under conditions rock'n'roll not always the most "secure". Briefly, a priori not all always based on rational, but there it is ...
And here I was amazed playability and efficiency side. It's less glitz than many other models, it is less licked sound level than other models. But this model has reconciled me with PRS: since I bought a MC Carthy and Brent Mason. As I said, it goes to the point and it suits me perfectly for the weight and versatility next stage. It is not super good in one area, but it is good in everything. My cover band of 60 ', "70, I can do a concert without changing guitars except for the open, without ever being disappointed and find the solution to everything.
The sounds are great for blues, rock, hardcore and metal to the nineties .... Things pretty "beefy" anyway. For the rest, it can also take many other things, but without much shine.
8/10

I use it for 5 months now and I've never faulted. In 30 years of music, I've played a lot of guitars and this one suits me perfectly for the scene. Efficiency, ease, reliability. At home I play on other models, and repeat, I turned, but on stage, it is a great tool for me. It has nothing to do with the OS, it's still expensive, it makes PRS poor - even more spartan than some SE models since I have spoken - but it was essentially without fear to fart on a high end instrument. In short, a versatile unfussy. It would delight of many guitarists who do not have the means to have several different models in hand ... Very easy to play more and bluffing in the sounds. In short, a nice and useful tool.
9/10 for the stage
8/10 in general