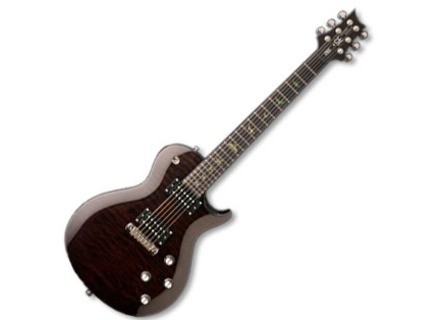 PRS SE Fredrik Åkesson - Forntida Brun
5
Fredrik Akesson is one of the new newer members of the bank Opeth. He formerly filled in for Chris Amott in Arch Enemy when Chris was gone for a while. When he joined Opeth he got in on their special association with PRS and got himself a signature guitar. Of the two Opeth signature guitars I like Akessens guitar way more than Akerfeldts. Akessons guitar is way less signaturey and more of a normal guitar. The Akerfeldt signature has logos all over it. With this guitar you get a mahogany body and a set mahogany neck. The body is slightly wider than what you would get on a Normal PRS SE single cut. There is a maple top with a flame maple veneer to keep the costs down. The neck is PRS's Wide fat profile which is great. The fretboard is ebony and it has 22 really big frets. Bigger frets than I have found on any other PRS guitar. The scale is PRS's short Gibsonish scale which is 24.5 inches. The pickups are PRS SE pickups but thats not a problem. The control layout is traditional with a volume and tone for each pickup and and 3 way toggle on the upper bout.

The short scale is hardly noticable with the jumbo frets and ebony fretboard. Not many SE models come with an ebony fretboard so that is great. This model has an adjustable tonepros wrap around bridge so it can perfectly intonated in different tunings since Opeth plays in nonstandard tunings. I like the pickup selector placement on this guitar. It is in a traditional spot as opposted to most PRS SE's where it is out on the bottom of the guitar. The slightly bigger body also comes with a slightly deeper cutaway so you can get to the upper frets a bit easier.

The pickups are decently chunky but are also very versatile. Opeth has selected pickups that can do a heavy sound but also a good clean tone. These pickups work well in both facets. In the bridge position you can hammer out riffs and thick chords with a lot of gain. With the bridge position set on a clean tone you can get more a quacky twangy clean tone which is good for hybrid picking. The neck position is great for high gain leads. It has a smooth sound but doesnt get muddy. The neck pickup set on a clean tone gives you a more modern smooth clean tone. Good for clean passages in modern songs.

This is a good guitar for people who just want a good guitar and people who like Opeth. It doesnt have the Opeth logo on it anywhere so you dont look like a billboard like with the other signature guitar. This guitar has a more traditional feel for a PRS with its shorter scale and thicker body. This does not hinder the playability though. The PRS SE line is great because they are making accessable signature guitars. An Opeth fan probably cant afford a USA made PRS guitar but just about anyone can afford a PRS SE and the quality is there. If you are looking for a more old school feeling PRS guitar or you are an Opeth fan this guitar should be checked out.
Did you find this review helpful?yesno
»