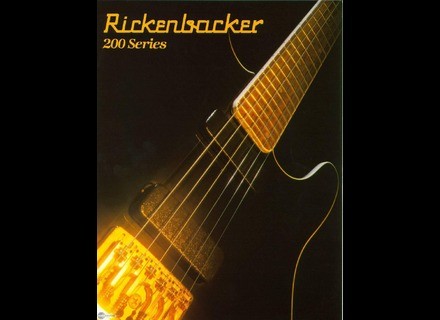 250 eldorado, Other Shape Guitar from Rickenbacker.

smell's review (This content has been automatically translated from French)

Rickenbacker 250 eldorado
5
Manufacturing Amricaine.
Dor fittings.
Possde handle 24 cases, it's cool right?
I do not know what type of microphone, but guitar has a microphone and a microphone severe acute. You can play on either and both shuffled. Both microphones have their own volume.
A special feature of rgler Ricken is that it can handle (bomb or no bomb?) With two screws and not like a lot of guitars! This means a screw for the three bass strings and one for the three treble strings, the must, the neck is straight as an arrow and is never disturbed by ropes to pull harder than normal.

The handle could not be more enjoyable, especially a sliding alone the key is varnish (this is rare). Access in acute is as easy as almost Premire freight.
Ergonomics is good but can be a BMOL because the head looks lgrement (possde a reinforcement of her neck under the bridge!) But either fawn remains TRSL gre.
The sound is great for those who love the Beatles can not get closer to their sound. And also sometimes the sound of Radiohead. Some do not like and swear by the Fender or Gibson, but they can not ignore the sound of Ricken CHARACTERISTICS.
As against it is not made to play solos, it remains more or less the shadow of rhythm patterns and accompaniment saturated (very well with any amp Laney type lamps) was a sound of thunder. The clean sound is magical, hitting the high notes and low, albeit discrtes, very round.

Like I said above, all styles of English pop prteront is the game that pretty bte. And why not a trend working its jazzy clean sound.
I play with an amp Laney LC15-watt all-tube, and a Fender M80 amp chorus. Two amplifiers, two choices, several options and styles difffrents but also good as the other one of their kind. All sounds are made by good we can saturate death, but beware, it does not default this guitar, you never hear the cling of rsonnance of breath when is saturated, only it's not really in his lment (if you really want to play the Nirvana there are other guitars ....)

I use it since 1993, is a gem that I had the chance to acqurir in time for a modest sum compared to the original price.
I do not sell!
But I will buy one kind with Strato to practice my solos.
I do it again this election, this guitar is a beautiful production with a REFERENCE.

sam!sound's review (This content has been automatically translated from French)

Rickenbacker 250 eldorado
5
This atypical Rickenbacker ("what? Ricken a solid-body?") Has everything to seduce.
Twenty-four boxes of fun. The frets are slightly square, the handle is very thin and varnishes. The pickups are double-winding very thin and covered with a plastic cover.
The bridge is fixed and is based on the strings of small media that can be screwed on their axis, thereby adjusting the spacing of these strings (in addition to adjusting the height and length).
Tone controls and volume, 3-position selector for the pickups.
The handle is reinforced with two adjustable bars.

The handle and Chevallet set gives a very comfortable game, the last frets are really playable. This guitar is very well balanced comfortable.
This gives a good sound easy, but it's thoroughly that it gives the best.

This guitar has a clear sound amazing. Ideal for pop (with a slight chorus, fender reverb, delay ...), crystalline arpeggios, sounds clear 60's, blues or slightly "crunchy". However, the sound is fuzzy and poor when he adds a fuzz or overdrive. Really not suitable for metal, for example.

I bought it in 1990 during a clearance sale. Mine is this typical Rickenbacker white paint which tends to yellow a bit, with a black edging around the edges. I love this guitar, although I dream with a vibrato (I enlisted the services of a Gretsch Electromatic, much more difficult, for this purpose.) It has not been a huge success in its output (at the same time as the Grunge ...), perhaps because she may lack originality in form, very simple for the brand. It is worth a very safe and very interesting instrument for its playability, its sounds clear and carastéristiques ... rarity!

See all 17 photos of Rickenbacker 250 eldorado »

Other Rickenbacker other Shape Guitars