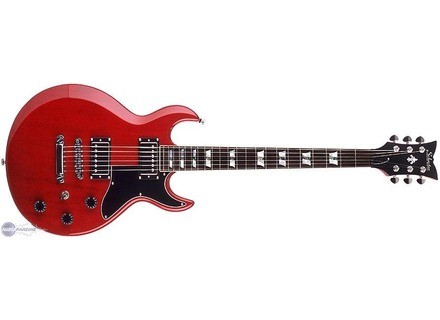 S-1, Other Shape Guitar from Schecter in the S series.

Schecter S-1
5
I have been playing for about 47 years. I used to play professionally until about 10 years ago, but I still like to play along with CD's and jam with other musicians. I sit-in with a local group once in a while. Of course I play a lot of oldies rock but my favorites are late 60's and 70's rock. I play for my pleasure.

Paid: A total of $445 which included sales tax, gig bag and a stand. My wife gave it to me as a Christmas present, but only after I singled it out after hours of trying out other guitars at the Guitar Center in New Orleans. I still own an American Fender Strat and a Gibson SG. Over the years I have owned a number of Strats, Teles, Epiphones and Gibsons. This S-1 is the guitar I have been searching for all my life.

I like everything about it, particularly the neck and the full sound. I have small hands and bar chords have always been a little difficult. I have tried guitars with fast necks like Ibanez and although fast, the too small necks tend to tire my hand when chording because there isn't enough 'meat' in them for leverage. I liked the Strat's neck because the 9.5" radius was more comfortable than my SG's. I didn't think I would like anything with a flatter fretboard until I played the S-1. This thing chords like a dream and the neck is plenty fast. I like the 24.75" scale rather than the 25.5" on the Stat too. I can do things on the S-1 better than I ever could on the Strat or SG. I like the white binding on the neck and the sexy inlays in the neck.

The sound it full and rich with the mahogany body. It sings. For me and what I play the pickups are fine. Just as good as my SG and with a lot more power than my Strat.


Only the Tone/Coil Tap control. Something is wrong with it internally. The coil tap works fine but the pot part does change the tone at all. I am going to get it repaired rather than swap it out for another S-1. I am already in love with it. I heard it was slightly neck heavy but with a leather strap, I can let go of the S-1 and it stays put.

Perfect except for the tone/coil tap control. Mine is the see-thru cherry finish and it is flawless. Like the Grover tuners. I normally have a lutier check out a guitar and fine tune it, but this one came perfect needing nothing (except for the pot).

No flaws in the fit and finish. This is a quality made guitar, regardless of cost. It beats out guitars in playability, sound and appearance of guitars costing much more.

This is simply the best guitar I've ever laid my hands on. If anything ever happened to it, I would buy another and Lord help anyone who ever hurt or stole it. It isn't the flashiest or most radical in looks but I recommend it highly. Try one out. You may be shocked by it's sound, playability and how much guitar you'll get for your money.

jackyvengeance's review (This content has been automatically translated from French)

Schecter S-1
5
In which country was it made? Korea
- How many frets, what kind of micro as well as their configuration? 22 frets, 2 humbuckers and split
- What type of bridge? Gibson type
- What are the settings? 2 volume knobs and one tone
- What type of race? handle quite a bit like the end of a les paul

- The handle is very nice enables rapid movement hallucinating ...
- Access to acute is easy, no problem to do a bend on the 22nd case
- The guitar is rather light, it has a good balance and is played both sitting and standing
- The sound of this guitar is very versatile depending on the selected microphones, the knobs ... it is necessary to adjust before playing to get the desired sound but get a good sound with this guitar is very easy.

- This guitar is perfect for all styles of rock and metal ...
- By connecting a Marshall efficiency is optimal
- The sound of this guitar is very fat and very sharp.
- In pickup and distortive strong enough, this little wonder I put a hell of a kick in the behind ...

For over a year since I use it and I never tire of yet ...
The splitter is really efficace.C microphones is the fifth guitar in my possession (Epiphone SG, Ibanez, two Strats ...) and it is by far my favorite!
The price / quality ratio is excellent, Schecter has to be the brand that offers the best quality / price ratio with Ibanez guitar in rock / metal!
I do it again 100 times if that choice is necessary, to 700 euros I do not see guitars that take the road!

Other Schecter other Shape Guitars