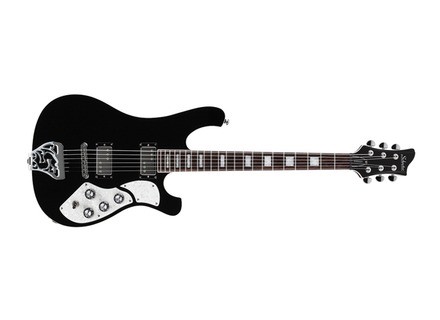 Stargazer, Other Shape Guitar from Schecter in the Stargazer series.

I paid $150 used for this. Deal of the century! I bought it off of a private seller on my local Craigslist.

Very easy to play. The neck is thin. A 24 fret 2 octave neck. The cutaways make upper fret access a breeze. It compliments the short coming of my P-basses.

I would prefer a pickup selector instead of the blend knob. But it is just something I have grown used to.

Maple neck, ash body with maple top. 34' Scale. String Thru body or at the bridge, 2-band active EQ. The quality of this is great for an import bass. The tuning stability is great. Very accurate intonation and setting the action low is no problem.

Bottom line is it is a very retro-looking bass with modern technology. I own mostly P-basses, but needed a bass with a variety of different sounds to cover what the P-bass could not. This bass was the ticket.

Schecter Stargazer
4
i knew a guy hard up for cash, i bought it for like 40 bucks, originally probably was about 99. I expected it to be worthless, but would be nice to have around my dorm room.

I gotta say, this is cool. Stays in tune nicely, plays really fast and extremely smooth. the wood is awesome, way better than my old epiphone les paul. It sounds decent enough, i wouldnt record a cd with it, but shows could be pulled off. I really think if i had extar money i would get better pick ups, cuz you can just tell when u have a nice playing guitar.

i hate the electronics, and i feel that its cheaply built, some of my screws are rusting. Plus it looks way too generic. But, looks are trumped by sound.

Its your basic stratocaster rip off with cheap single coil pickups, black finish, white pickguard. The neck is a white wood (maple?), and the fretboard is a darker wood.

The bottom line is, I have no idea who makes or sells the stargazer. But if you ever run across one for around 90 or even 100 bucks, play it and see if it suits you. Would be excellent for lessons or someone beginning to play, very unintimidating to play. Plays very flowingly, its joyful almost.

Other Schecter other Shape Guitars