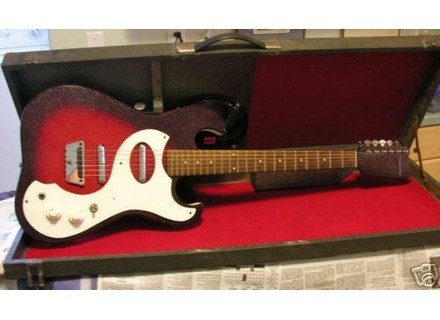 the neck is fairly wide and flat perfect for slide guitar light enough unless his little sister, well balanced, access to the treble is not great but acceptable say
the sound is exellent no matter what you do with.

definitely blues, roots, rock, garage rock
I use several different amps marshall fender silvertone regent
and it really agrees with all sorts of stuff even effects
The sound is warm and powerful in the middle position, and lighter on the bridge Crystal clear and warm and jazzy on the neck

I had quite a gibson and fender, there is really the third guitar that for quite some time "replaced" my strat

the sound is really great
Did you find this review helpful?yesno
»

mns's review (This content has been automatically translated from French)

Silvertone 1457 - AMP IN CASE - 1964
5
U.S. to manufacture micro 1964.2 lipstick, 2volumes, 2tonalités, 3positions selector.
The bridge is spartan: the strings based on a piece of wood, such as Danelectro: in fact it was made by Danelectro for Silvertone.
Rudimentary mechanisms, however, are undaunted.
The paint is flecked with glitter discretes.Le body is lined with a plastic white.
As the first basic price, but the whole works.
The tube amp is 5W Sears and has 1 volume, 1 tone, and a tremolo with 2 settings.

The handle is very hard to play (in the style folk guitar first prize)
It is very light, it looks like we have a toy in the hands, and indeed the body is not wood.
Access to acute is an achievement, and the learned are not in the area, but not the interest of this guitare.Ce the grate is not out to impress their friends ... especially the Satriani fans!
on the other hand, in its register, the sound is immediately to go and that's the principal!

I use a Fender Twin Reverb, a Peavey Studio Pro 50, but with its original amp "amp in case", it has the most charm: 5W's are very effective, it is on the heart of 60's (even 50's). The tremolo is a sound one régal.On authentique.Curieusement psyche, it is with this guitar amp that sounds the best. (I tested it with a stratovolcano, TV, and SG )
She brings a warmth to its clear arpeggios, but is equally at home in saturation! Yes!
Ideal Comunication breakdown of Led Zep for example, but also kind of punk New York Dolls, Ramones ...
The guy who I bought it, used it mainly slide.Là has a full and brilliant at the same time, it still was used by George Harrison in the Traveling Willburys.

I bought a few months ago to 800E, "amp in case" in perfect condition with an added transformer to operate in France. (The amp is designed for the U.S. market in 110W)
I do not regret a penny.
I especially like the authentic sound.
I did suggest however, that someone who already has two guitars "standards" like Fender or Gibson. It complements a set already serious.
Better to know already playing before you buy, because although originally it was a beginner guitar, I think we may find it easier to play to begin.
Better also to find his receiver integrated into the enclosure of origin.

Other Silvertone other Shape Guitars