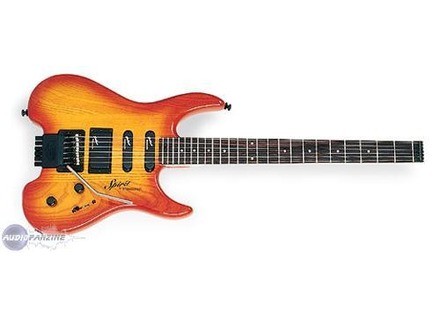 The ability to lock the tremolo is a major bonus. Tuning is very accurate and sensitive thanks to the headless design, and the tremolo holds tune well (though don't expect it to perform like a Floyd Rose; I wasn't able to get more than a half-step bend on the trem before the mechanism begins to feel strained). And this guitar is feather-light.

As aforementioned, the tremolo can't perform wide bends. The fingerboard doesn't invite digging in -- playing at upper frets feels forced and rough, and bending is not easy. The EMG pickups don't offer as much sensitivity to your pick attack as most guitars I've played. The tremolo bridge doesn't necessarily hold tuning when you flick between trem and locked modes. And if you're used to regular guitars, it can be awkward to have almost no neck weight whatsoever.

This design makes for a great travel guitar, not so nearly warped in shape as the Fernandes Nomad or the Fender-owned Traveler guitar series. It doesn't have much of a unique character sonically, and because of its vastly different feel it will not likely replace your favourite guitar, but it's a good option to have.

Other Steinberger other Shape Guitars