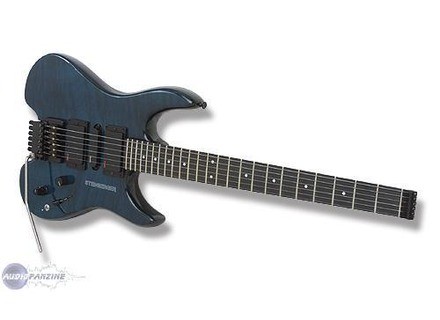 Steinberger USA GM-7TA
5
The Steinberger GM7TA is not for everyone. I realize this, and have dealt with snide comments about it from almost the day I bought it. Guitarists as a group do not like change, and Steinberger is the embodiment of change. It is also a spectacular instrument with very few flaws.

There is much to cover so let’s start with the neck. The neck is made of carbon-graphite, and is the scale length of a Fender. It is headless which amazingly only disorientated me once while playing it. I don’t buy into the whole notion that neck wood effects the sound, but it is the most tangible part of the guitar. It is our greatest connection to the instrument, and the neck on the Steinberger feels fantastic. It is undisturbed by weather and sweat. It doesn’t even have a truss rod, because it doesn’t need it. All twenty-four frets are easily accessible due to the body shape and the carved heel.

The body is contoured for comfort whether standing or sitting, and is made of mahogany. It takes visual cues from a strat shape, but with an indent to allow access to the bridge. The instrument is well balanced with absolutely no neck dive. The guitar does not need a stand due to the body shape, and can rest easily against a wall.

The pickups are EMG 89/SA/89R with a five-way selector, coil tap switch, volume knob, and two stacked tone knobs that are for bass and treble. The electronics can capture both a Gibson Les Paul growl or a Stratocastor quack all depending how you set them. I had no idea that EMG was considered a heavy metal pickup, because I can get very beautiful clean sounds out of the guitar.

The Trans-Trem bridge is the Cadillac of whammy bars. You can do dive-bomb after dive-bomb and still stay in tune. It can be locked to get a fixed bridge aesthetic to your playing. Also, if you break a string just lock the bridge and you can keep going in tune. The Trans-Trem can be used like a capo to change the open tuning up a whole step or a minor third. It can also be down tuned either a whole step or two whole steps. It is a very comfortable whammy bar to use and over-use. I cannot over emphasize the tuning stability of this instrument enough. The double-ball system also makes string changes a snap.

My complaints are few with this guitar. It is very heavy, and will fatigue your shoulder at a long practice or gig. The double ball strings are hard to find, and are more expensive than standard strings. There is an adaptor that can be added that will allow the use of standard strings, but the Trans-Trem is tough on strings and I wonder if a standard string can take the strain. The only other problem is the frowns you incur from other guitarists when you pull this instrument out of its case.

The Steinberger is very versatile instrument and can transcend genres. It has been my workhorse since 1994, and I don’t foresee a change in that anytime soon. The only repairs have been the volume pot and input jack needing to be replaced. The only modification is the addition of straplocks.

I love this instrument. I think it is beautiful, but I understand if others don’t share my opinion. Every guitarist that I have given an opportunity to play my guitar all come away with the very least a begrudging respect for it. I am disappointed that after Gibson bought up Steinberger that they cheapened the brand, and reduced the selection. I would love to buy another Steinberger, but the older ones are getting too expensive. I highly suggest (if you have the means) to pick up one of these guitars, you won’t be disappointed.
Did you find this review helpful?yesno
»

Other Steinberger other Shape Guitars