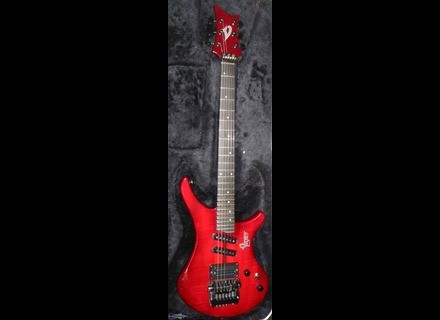 Stev.'s review (This content has been automatically translated from French)

Vigier Passion Custom
5
I bought this guitar new in 1990 (No. 307) directly to Patrice Vigier, at the time he participated personally in the construction of each model out of its "small" Attelia Evry, I had set him same, and since it does not blurry ... I remember a guy very nice and accessible.

In terms of features nothing missing on this wonder. I would put a 10 Justification.

So there it is enough to write a book.
- The 5-position rotary switch is actually a preamp with EQ 5 disctintes different properties that allow for as many different colors and really efficient and taken together with selectors + micro push the volume button you end up with a range of not least 30 different sounds. With the possibility of the three microphones connected in series!!
- The handle: it is the ideal radius, access to acute fabulous, it's not even a highway, its just a speed ring ... (tapping on its plaintext is as effective as a Jackson disto !!!!) The look is amazing indestructible ... the setting does not move, as we move from the 9 / 42 to 12/54 or more and more it has aged very well (allori that bad languages ​​at the time told me that blisters appeared after several years) and the contact is good but not great, it's not qmême wood.
- The body is very light and relatively "small" is very comfortable and really like the female gender by the delicacy of his style.
- The vibrato, certainly the best ever used on a guitar, and other dives were amazing, many times I found myself pushing on the rod so that the strings hung me on the knees and the guitar was given ... c ' is to say ...

It's really a guitar exeptionnelle for professional, I used a lot both in the studio for its precision, accuracy and versatility on stage for its playability, its big sound and reliability.

This guitar deserves a 10 but I did put "only" 9 because it has not to my taste the character of an LP or a Start.

With 30 sound possibilities ... there's something for every taste. From Off-type phase which gives the sound of a big game Accous electronic sounds, one can really deal with all styles of music.

But beware, all the sounds of passion III are tinged with a special brightness due mainly to the material of the handle, which for no appeal to all guitarists. But the clean sounds are very clear and warm, very bluesy crunch (but less than a strat flutes) and very furious distos (less fat than a LP).

Passion III standard or custom on the guitar is a Formula 1 cars is a truly dreadful alchemy of technical and efficiency. I advise primarily for experienced guitarists disctintion loving and universality. Equally at home plugged into a DI or with rack effects.
In short it is a very VIGIER Haute couture with a violin and an exemplary finish, very Loint VIGIER the current series.

The main criticism I can make this instrument is that it is too perfect and as such dire need of soul and warmth.

But I sincerely think this model is becoming an instrument of legend as a series L or LP 57.
To test urgently if you see a pass and especially if you like ... keep this !!!!!

Other Vigier other Shape Guitars