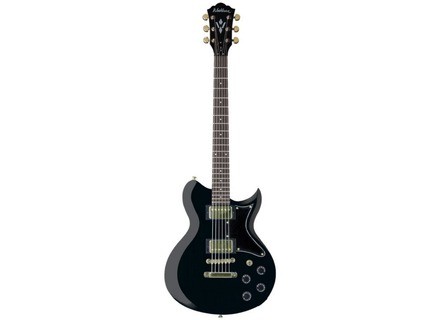 WI64, Other Shape Guitar from Washburn in the Idol series.

I bought this guitar at Sam Ash for around $300

When I went to Sam ash i had no idea what i wanted. I told them my price range of $250-$350 and they showed me some guitars. After playing with this, an Ibanez, and a Fender, this washburn sounded the best to me. It was the most audible when it was not plugged in. Not very loud but loud enough for me to play in my room when im bored. Also, this has a set neck that makes some nice sustain. I also liked that there are 4 knobs to really get a variety of tones from this guitar.

I love this guitar. The only thing that i dont like is that the volume knobs seem to not do anything. 1-10 have the same volume and 0 is off.

Nice solid guitar. I banged mine into a few tables already and there is not even a scratch!

Washburn WI64
5
Bought my baby (as I like to call it) in a store in Dublin about a year ago (late 2002). I went in to the store with a budget - looking to spend maybe 700 on a basic Strat or something similar and ended up buying the washburn for just under 500 ($400) with case, strap and new strings thrown in!!

Ya see, I'm only slightly more than a begginner really, my previous electric being a cheap an cheerful strat copy, but after trying Les Pauls and Strats in the shop the Washburn just blew me away!! Tone wise there could be a lot of improvements and I'm not advanced enough to make those myself! (yet!) But it's an absolute dream to play!! Of all the guitars I've played I've never had as much fun as when I play it! The action is superb!! I can feel the tendonitis settin in already!!!

Like I said the tone isn't great, the Voice Contour Control system proving to be a wee bit weak!! But I find with a tiny bit of tweaking I can get between similar to an SG all the way to similar to a strat!! Which isn't a bad range and I can garauntee you won't be frowned at using it for a gig, no matter what style or sound you want to produce!

Build wise the WI64 is a solid guitar! Very nicely balanced, and very comfortable to play, wether sitting or standing. I also find it considerably easy to play on the upper registar, which I have found not so comfortable on some guitars (eg, BC Rich's)
Fittings have a tendancy to come loose quite often though and be careful with that sweeping right hand!! The pick up selector switch isn't the strongest, but can be replaced easy enough with a standard 3-way, eg from a LP or SG.

Bottom Line: Excellent Guitar!! If you are looking for a high quality guitar at a seriously low price this is the one for you! The action, balance and sheer playability of this guitar more than makes up for the slighlty weak tone. I bought this when people told me to wait and spend more money on a different guitar, and I'm glad I didn't listen - It looks good, feels good, end of story, this guitar is good!

Washburn WI64
5
Made in Indonesia, very good finish, scratches on the body and giving a acastillage old relic having been used extensively. it has the mouth!
Tune-o-matic like a Gibson, the mechanical tuning that really want, not need to spend 2 minutes to retune every time they take.
The neck is not thick but a little wider than a Telecaster neck, and he is stuck there a trussrod but I have not touched.
The pickups are humbucker Washburn from home, it's very honest. Especially they are splitables (VDC system), we can go from a simple micro microwave double. Finally the true rendering it looks like a rising gain. So there are two volume knobs and two for the VCC, one for each microphone, and so is the difference.

The handle is nice although I was used to finer on my Tele.
Ergonomics: The body resembles an SG, it is very thick, controls, etc. the bridge, with an addition, the head does not have this annoying tendency to fall when you release the handle. It is very light, you can fuck with

The sound is not like a Gibson, there's a little something that makes it can sound a little vintage with just a little "twang" that reminds one of the Telecaster. But in clear or distortion sound is still "fairly" clean. With a little chorus and volume a little too hard, it sends the wood!
I plugged into a Marshall 30w with a pedalboard Korg G3, and here there is everything you need. Without pedals, the Marshall does not make great, I have not tried it long but I thought the sound lacked scale, as in plain distortion.
I also branch micro cube, and there is the splay! it fits like a glove, it's different but not worse, I would have his head on a big cube with Roland.

I have since November 2011 so I have not made the rounds of the beast.
I have after playing on Epiphone SG, Epiphone Sheraton II, Squier Telecaster.
Most of this guitar are
- The ease of playing, as on an Epiphone but lighter;
- The light smack on the ropes like a Telecaster;
- Microphones and split-;
- The mouth with the appearance relic.
For less than € 500 new, I think this guitar plays the game well, it's a good price / quality ratio.

Other Washburn other Shape Guitars