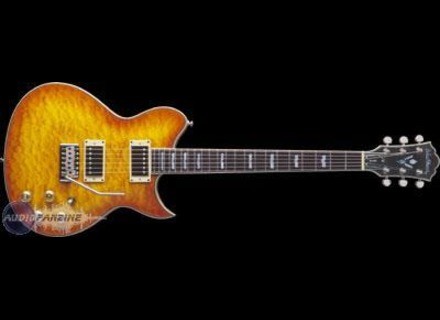 WI66V, Other Shape Guitar from Washburn in the Idol series.

This guitar plays easy as hot butter! The tones you can get from the VCC is a wonderful addition and a great assist. The Buzz "F" tuning system is somewhat of a mystery to me; I don't see what the deal is but it does stay in good tune. The wodd is mahogany with sustain that lasts for days.

I lofe the entire package. Washburn has proved again that they can put out a high quality import.

Solid like a PRS or LP with a super sound. The carlem color is simply a delight to behold. My musician friends thought it was a PRS from a distance. Grover tuners keep it in tune and the weight is a perfect balance. Beautifully bound edges tpo the axe off nicely.

Go, Play one them compare with the higher dollar Gibsons and PRS' offerings. Save yourself about 1000.00 and get an equeal or even superior insturment. Don't be bound by name brands or peer pressure. Don't by a guitar before playing a model either.

Washburn WI66V
5
I had been looking at this guitar online and was about to buy it from Musiciansfriend.com when by chance I happened to find it on E-bay. It was $299, on sale, marked down from around $600. I got it on Ebay, new, for $304, and it came with a gc-41 hardshell case.

This is a beautiful guitar. Mine is see-thru blue, but it also comes in see-thru red and caramel-burst. These colors both are also very nice. The blue has just recently been discontinued, so I got lucky. Its two humbuckers work very well. I can turn my amp on full volume and distortion, and it doesn't feed back until I get it about a foot away from the amp. The fretboard is pretty easy to play on. The selector switches and control knobs all work well. The VCC (Voice Contour Control)knobs are awesome; at 10, they are full humbuckers, but as you go toward 1, the coils split to sound like single coil, and you can get a very accurate fender sound. The tremolo bar is also a nice feature.

Washburn makes a big deal out of the buzz feiten tuning system, but I don't notice any difference while tuning it from any other guitar. There's actually nothing bad about it, I just don't understand why they brag about it so much. The gc-40 case will work, but the gc-41 case is much nicer if you can find it. There really isn't anything that I don't like about this guitar

Construction is very good. The guitar body and set neck are made of mahogany, and the fingerboard is rosewood; the guitar feels very solid. It has awesome winged fingerboard inlays... something unique, to set it apart from all the dotted ones, although, I wish they would have made the 12th fret inlay a little more distinct than the rest, but it does have the double dots on the side of the neck for you to find it easier.

Plays great. Looks amazing. Solid construction. Unique look to set it apart from all other guitars. No reason to buy another guitar for a long time.

Washburn WI66V
5
I bought this guitar from Musician's Friend ($299 clearance) as an addition to my modest collection of mid-ranged instruments. I am a High School Band Director, guitar hobbyist, and freelance musician. I bought this guitar to fill my line-up of style specific electric guitars such as my Fender Standard Strat (Blues/rock guitar) and my Epiphone Joe Pass model (Jazz/blues guitar). Now I have the Idol as the guitar that I can play all these styles with along with some metal now due to the hot high output pick ups.

I pretty much like everything about this guitar. It has a great playing neck, great pick ups clean and distorted, it is very well constructed, and has a great wine red finish. It sounds as good as it looks! I'm not exactly sure the VCC and Buzz features work "technically" but I is different from all the rest. It doesn't have the mid-range bark that Les Pauls have but you can acquire that sound if you set the tone knobs the right way. It has a very full, well balanced tone by default (with all the knobs at 10) which is a great slate to start from.

I have to be very picky with the things I don't like but if I have to decide, it would be the following: there is no recessed cut for the right arm like on a strat and I wish the toggle switch was where it is on a Les Paul for easier access.

The construction of this guitar is great! The finish is exceptional, the mahogany body and neck sound great, the quilted maple is enhanced very well, and the hardware is perfect.

If you need a well rounded, practical instrument that can crank out a dynamic extreme of tone and applications, this is the guitar to get. At its price for being a discontinued model it is a very amazing buy. Even at its original price of $539, it would have been a steal. It has great clean and distorted tone that is very easy to build on if you choose to.

The Washburn Idol Series WI66V is an absolutley unique guitar. Due to the Voice Contour Control (VCC) system, it can produce the sweet twang of a single coil guitar, or the fat tone of a Les Paul, although the sound quality definately leans toward the single coil. The VCC system produces a unique sound. I have never cared for the single coil tone until I played this guitar.

It has the Buzz Feiten tuning system which is reported to give a guitar 95% tuning. I don't completely understand the Feiten system, but the guitar does tune well and stays in tune once you have it set up; much better than my Les Paul.

The neck has absolutley no heel! (Take that PRS players).

The quilt maple top is scrumptious, and the caramel colored mahogany back and sides makes this guitar a joy to look at.

There is nothing about this guitar that I don't like.

The construction and quality is way above average. It will not contest a hand-made guitar, but for a production import I don't think it can be beat. It has some nice double binding on the body and headstock as an extra touch.

This is a beautiful, fast playing solid body guitar, with a unique sound utilizing a unique (VCC)system along with the Buzz Feiten tuning system. Simply put, ahead of its time.

This review was originally published on http://www.musicgearreview.com
Did you find this review helpful?yesno
»
Read the 5 user reviews on the Washburn WI66V »

Other Washburn other Shape Guitars