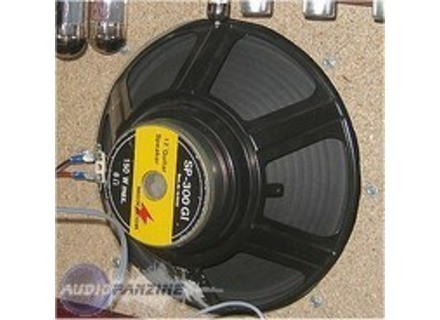 All user reviews for the Monacor SP300GI

Average Score:2.0(2/5 based on 1 review)
Value For Money : Poor
Not satisfied with those reviews?
Our members also liked:

Ipwarrior's review (This content has been automatically translated from French)

Monacor SP300GI
2
What characteristics have motivated your choice?
Ah! Alas it was the price at the time: I bought them at Club Feral now defunct.

For what purpose?
I had delusions of grandeur: I have mounted in a Jensen type (except at the time I did not even know what it was like a flag "type Jensen" I called it a flag BR quarter wave.

What amp / What configuration?
Originally mounted on a 2x80WRMS house (which I removed since).
Now they are in a box similar to the 55 liters of Blue Box Sound 85Hz/80Hz agreement but for maximum power at 100Hz.
They really do sound more guitar, so finally: think of Gibson hp, hot fat and round.
Their strong point is the definition of the medium, which is higher than the SM Beyma, but the rest is not too much.
Their design allows them overhangs without damage, which is appreciable.
For me it is possible that their ferrite is discharged: they turned not long, but almost completely.

The frequency curve is sufficiently neutral?
Ah not too much! QTS = very nice bump in the high bass. They are scheduled to open the combo guitar ...
The stereo image is good?
In the medium for that yes they do best: for those who love the membrane and its failure typical Bicone (hollow to 1 or 2kHz before over the second cone)
The sound is clear and precise across the spectrum?
Especially in light medium, high bass severe dry the base quitar hp ...
The dynamics are respected?
There are quite punchy even if it does not compare at all to ténords domain.

For how long have you been using it?
it has to do now .. 15 years? at least 10 years.
What thing do you like most/least about it?
most: super medium
minimum: this too hard ... QTS
Did you try many other models before getting this one?
No.
What is your opinion about the value for the price?
A bit expensive for its time, and it was the first prize.

Knowing what you know now, would you make the same choice?
There is a nice home Bicone Fane, but overpriced.
In addition there are still basic at P 2 audio.
Bicones are good for cheap broadband.
A typical example is the 12AG1N of Beyma and 12GU: a Afien has mêmefait returns to stage with so it still has not worked too badly as the type of technology even if it is exceeded.
The only advantage: when the hp thermally compress it affects all the bandwidth: the coloration is less marked in principle.

Knowing what you know now, would you make the same choice?
In fact the SR1 and SR2 of Celestion appeared to be a better choice, but it's not the same price!
Hps 20Khz covering the broadband sound is exceptional.

4 / 10 because the combined SP300GI PCD30 can still serve me in subwoofers.
FPs and Bravy were strengthened, it is possible that bicones not serve me more.