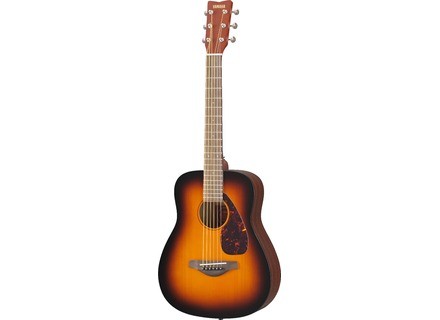 JR2, Other Steel String Guitar from Yamaha in the JR series.

All user reviews for the Yamaha JR2

Yamaha JR2
3
Yamaha is a company that builds pretty inexpensive guitar instruments for the budgeted musician. They're pretty well known for their bass guitars as well as their acoustic guitars. This is there JR to natural series which is based off of the FG series. This is a very small and compact acoustic guitar that is a pack and play type of instrument. What I mean by that is it is a good guitar for someone to throw in small bag and go mobile with their guitar intranet. It's a very smaller guitar compared to the normal standard size guitar insurance. This is a cool little outdoor type of guitar that you can almost allow it to get ruined or abuse because it's pretty inexpensive and it's one of those guitars as great for road trips or any type of outdoor singing and guitar playing activities.

This guitar is mahogany based wood and it is a compact size so the tone is a bit smaller in stature. Overall there isn't really any features of this instrument...its an acoustic. There really aren't a load of features and you certainly don't need a manual to figure out how to strum the acoustic guitar.

The guitar itself is a cool little guitar and doesn't really have that big bold sound that you were here out of a tailor guitar or a Gibson guitar. It does feature is a decent sound for someone is looking for an outdoor or mobile instrument. Overall it's a cool little guitar and if you need something that's going to be abused or taken advantage of in this is a good instrument to have.

For the price point and features and tone that you get with this guitar is is a decent instrument. this isn't going to be a main acoustic for a professional guitar player but it will get the job done with someone who needs something relatively inexpensive and cheap. I would recommend it to someone who needs a backup guitar or doesn't care how well it sounds.
Did you find this review helpful?yesno

Yamaha JR2
4
The Yamaha Jr acoustic is a great little guitar that takes the classic Yamaha dreadnought shape/design and shrinks it down to 3/4 of the size. It's perfect for smaller players or just having as a guitar to take to the campfire or the office. I was given one at age 4 when I started playing and used it for many years until I grew into bigger guitars. It features a spruce top, nato back and sides, nato neck, rosewood fretboard, standard tuners and bridge and a shorter scale length to compensate for its smaller size. It's available in natural or sunburst.

This guitar is nice and light. I was able to play it with ease when I was small and it was no trouble to hold and play for long periods. It has a nice small neck on it that's intended for players with small hands so that they can chord or play lead on it fairly easy. The dreadnought shape might be a turn off for some people, but it does help to fill out the sound pretty well. The upper fret access isn't crazy but seeing as it has no cutaway that's to be expected. This guitar has a nice sound, which can be helped even by putting on some nice quality strings to brighten up the sound.

The sounds out of this guitar are pretty good. It's obviously not going to sound as good as a full sized dreadnought guitar, but it's actually not bad considering the size. It really has a decent punch to it which is nice. Chords ring out nicely, and playing lead work on this guitar works well too as it has a nice natural sound that allows single notes to really shine through even though there's no effects or amplification.

All in all I think the Yamaha Jr acoustic is a great guitar for someone looking for a high quality way to get into a smaller acoustic guitar. It's not quite as small as their nylon strung Guitalele but it's a nice balance between that and a full sized model. It's a good quality guitar that feels good and sounds quite nice, especially when you change out the cheaper stock strings for some nicer ones and start to playing. This comes recommended!
Did you find this review helpful?yesno
Cookies help us improve performance, enhance user experience and deliver our services. By using our services, you agree to our use of cookies. Find out more.