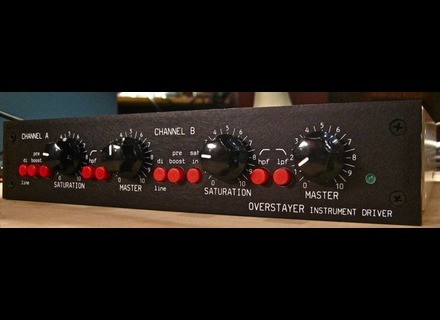 All user reviews for the Overstayer Instrument Driver

Overstayer Instrument Driver
5
The Overstayer Instrument Driver is essentially a saturation device for warming up your sound a bit. Overstayer is a small company out of Los Angeles, but they have a few great products at extremely reasonable prices. This unit is two channels, and has XLR connections for both inputs and outputs. I believe that it also has 1/4" jacks, but since we hooked it up to the patch bay via XLR to TT cables, we didn't use these. One of the staff engineers at the studio where I work has this and brings it in on almost every session. It isn't rack mountable as is, but I believe you could custom build a one space unit if you had two of these, as Overstayer also sells some hardware on their site for doing this.

The general make up of the Overstayer Instrument Driver is pretty simple. Each of the two channels has parameters for saturation and master volume, as well as buttons for a high and low pass filter. It also has buttons for choosing between your mic or line input, a preamp boost, and for putting the saturation parameter in or out. I haven't seen the manual, but this is easy enough to figure out on your own that one probably isn't necessary.

The sound of the Overstayer Instrument Driver is terrific. This thing is perfect for adding a little bit of gain and warmth to a number of different applications. A lot of times we'll plug a keyboard directly into it, as it's like getting a DI sound with a bit more warmth and a more realistic, analog sort of sound. It's also great for bass DI and for just about anything where you would want some saturation. It's definitely a versatile piece of equipment.

Overall, the Overstayer Instrument Driver is a great piece of studio gear to have around. The price of it also makes it accessible to just about anyone interested in something like this. As far as getting a lot for a little amount of money, you're not going to find too many deals like this out there. I'd also recommend checking out the Overstayer Stereo Compressor, as it's the best for the price I've seen. Overstayer and their Instrument Driver are definitely some things to be aware of...