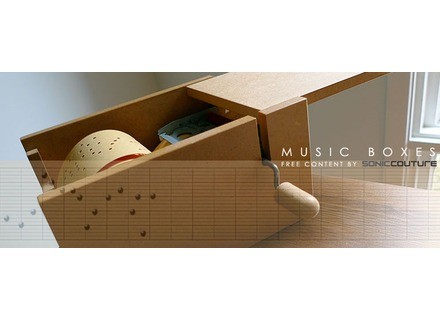 songboy's review"An excellent sampling of a classic staple in soundtrack writing, and it's FREE!!!"

Soniccouture Music Boxes
5
I run this on a Macbook Pro i7 with 8gb ram and an RME Fireface 800 running Kontakt 5, Ableton 8 and Logic 9. So far, there has been zero issues with this sample set. It is a fairly simple instrument so I don't believe you will need to reference the manual for anything if you are already familiar with how Kontakt works. The setup is very simple, just install it and locate the file using Kontakts browser and open it up. The GUI is very clean and relatively basic. You get some basic controls including Attack and Release, Cutoff and Resonance, and some effects which include a High pass filter and some reverb. Everything you can do with this instrument is sitting right on the face of the GUI so everything is accessible.

So far I have had no bad issues with this plugin. Everything seems to work properly and I can get what I need from it in a matter of minutes. Whenever I use this in a project, it saves and operates perfectly fine. I give this a big 10 out of 10. It sounds better than any music box recording I have ever made and it's already set up to be played via keyboard/midi. Oh yeah, and it's FREE!!! I have been using this for a few months now. I stumbled across it when I was looking for a Music box sample for a soundtrack I was writing for a friends anime film. He and I were very pleased with the sound quality and were able to right and record the part with in an hour.

What I like most about it is it sounds fantastic and is very easy to use. I also like that I didn't have to shell out any money for it. There isn't anything I could imagine complaining about. It works well and sounds good, what else can you expect from such a simple instrument. You can't beat FREE. This is the first dedicated music box sampled instrument I have ever used. I have used many Music box patches in various synths, but this one sounds far better than any of those. I highly recommend this plugin, go pick it up today!
Did you find this review helpful?yesno
»

Other Soniccouture other Virtual Intruments