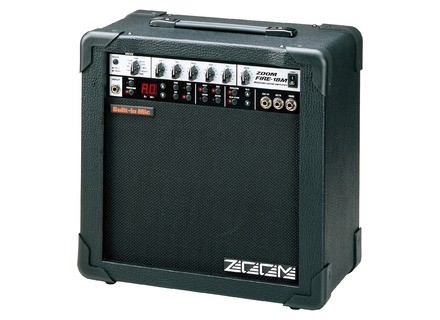 Zoom Fire-18M
3
I am taking a different approach to the review of this amp, and the Washburn X-30 guitar I got at the same time, than I usually do. Rather than live it with months or years, I am going to review these on a "first impressions" basis, as I play them, together, for the first time.

With an 8" speaker and decent controls, the tone to be had from this mic is better than some amps in it's class (budget/bedroom practice amps, under 20 watts.)

Versatility is this thing's forte'. Perfect tone, alas, is not. The "clean" and "Fd" (Fender) amp settings, for instance, are not so clean- no Fender tube chime, here. None of the amp models were identifiable as being modeled after a certain make of amp- Marshall, Vox, Fender, etc., by sound alone, but they do a reasonable job of reproducing those tones- for a bedroom amp.

First thing I did was tune the guitar, of course. On-board tuner can either sound the notes through the amp, or mute them. Nice touch. Display is easy to read, and fairly intuitive, once you realize what it is doing.

The 11 amp models were next. One thing I can say for them- they are ALL different. Some rather over the top ("Metal, in particular

and the "acoustic" model is a bit weak on volume- but it does about as good a job of simulating an acoustic guitar as most do. "Plain" amp model defeats all the effects of the model amps, which might come in handy if you want to use only out-board effects, but really, who would? If you are using stomp boxes and such, you are probably using a whole different amp. The LED display reads out the value of whatever knob you are turning at any moment, and the knobs have dots to give you a rough idea- another nice touch. EQ's are active, with cut and boost on all three. For "18 watts," this amp is not nearly as ballsy as that power rating would suggest- if it were not for the balanced line out XLR and unbalanced TS jacks on the back, this would be a bedroom amp, only.=-(as of this writing, I have not tried those outputs) until you switch from "manual" to "program-' then, it gets louder. Not tube-amp, Twin Reverb 100 watts loud, but at least loudER.

The effects are all accessible via little buttons on the front, so most can be had at the same time. This amp commits the budget-amp's cardinal sin- only one parameter of time effects can be changed- but that's common at this price range.

The feature that is unique on this amp is a built-in condenser mic, positioned right in front of the speaker but behind the grill cloth, which Washburn promises will allow the user to "mic" the amp easily- just plug into the line-out and adjust the mic level out and/or line-level out to taste. I am looking forward to trying this out, and will report back.
Did you find this review helpful?yesno
»

Zoom Fire-18M manuals and other files