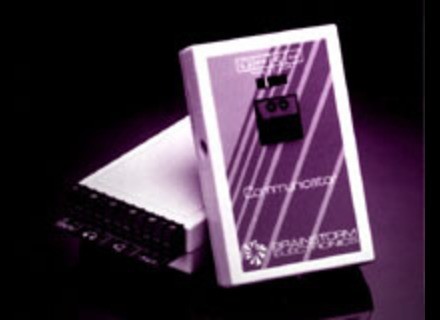 Brainstorm Electronics TB-4 Communicator
5
The Brainstorm Electronics TB-4 Communicator is a unique device for wirelessly controlling your talk back button in the studio. I had never heard of the TB-4 until a couple of weeks ago when I had the chance to use it in a major LA recording studio. I don't know anything about hooking up the TB-4 with your console or anything like that since the studio had it all hooked up and ready to go. It doesn't have a built in microphone that I'm aware of - it simply engages the talkback button on your console so if you're in another part of the room you don't need to go over there and push it. It's really a simple thing but can be a lot of help in the studio, especially in larger studios with a big control room. If you're adjusting some outboard gear in one part of the room and want to speak with the players in the live room, it's nice to not have to go over to the console in order to do so. Looking at the specs, the TB-4 Communicator is powered by a nine volt battery. It also has four modes to work with for different situations and for controlling different monitoring. These modes include headphones, speakers, headphones and speakers, and an auxiliary option. I'm not sure how you control each of these or what the set up is like, but it's always a good thing to have options. As far as price is concerned, the Brainstorm Electronics TB-4 Communicator is quite expensive for such a little device! This is certainly made for major professional recording studios, as it's not really necessary in any other spot, hence the large price tag. That being said, I think major studios will find that their clients would love to have the TB-4 Communicator available to them.
Did you find this review helpful?yesno
»