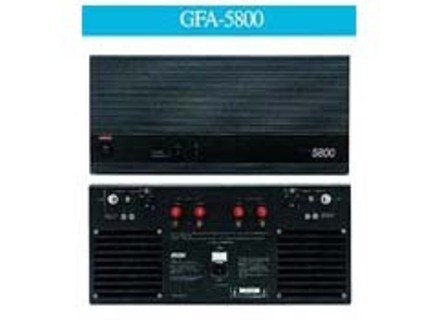 Adcom GFA-5800
4
The Adcom GFA-5800 is a stereo power amplifier for your passive monitors. I don't own this but I've used it at a studio with a set of Tannoy 8's I believe. The amp seems to do a great job of powering these monitors, and the owner of the studio mentioned that it's the best amplifier he has heard from the monitors, which is something that can make a big difference. You connect your monitors via speaker cable and can plug your sound source in via an unbalanced RCA connection or a balanced XLR input. It's a pretty big power amplifier and shouldn't be in a spot where you're going to need to move it often. It is rack mountable but will take up something like six spaces it seems as it's really gurthy. I'd recommend just keeping it on the floor behind your desk so it's out of site but still doing it's job. It's not like you're going to have to change any settings on it - just keep it plugged in and let it do it's job. I believe that this is the first power amplifier that I've used from Adcom, so I can't compare it to any other power amps from them, but it seems like the GFA-5800 is a solid power amp for passive monitors in the studio. Again, it depends on the monitors for sure, but I know from experience that Tannoy 8 monitors sound great with this. He had a different power amp in there before if I wasn't mistaken and it seems like the Adcom definitely sounded better. I have no clue what this will go for or how hard it might be to find. In general when it comes to power amplifiers, you're probably not going to want to spend the effort to seek one out specifically, but if you come across one of these used, it's probably worth a second look if you need a power amp.
Did you find this review helpful?yesno
»