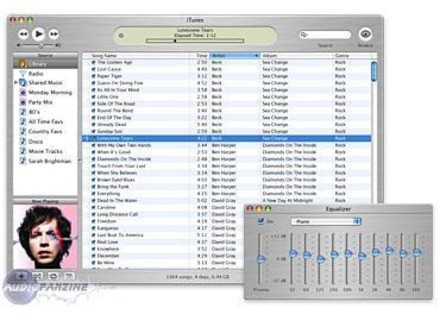 Anonymous 's review"I mean, you already own the software."

Apple iTunes
5
All of the eggheads in the internet can argue about the technical this' and that's of their favorite media player, but being a bit of an egghead myself, and having used a lot of these esoteric programs like WinAmp and Foobar and all the others, I sometimes wonder what actually makes them better. I can't figure out why past me condescended to the use of iTunes; I guess some techno-geek told me that if something can't play esoteric audio and video files, that it's an inferior program.

Apple's iTunes is a masterpiece for one reason: its GUI (Graphical user interface for the computer illiterate). If you've ever used an iPod, which you have, iTunes has a menu a bit like the iPods, but of course, the quality and comprehensiveness of the menu is scaled to the quality of a computer. It organizes your music perfectly using the ID3 tags of the files, so you'll be able to find anything you like even if you just remember one piece of information about the music.

And before I go any further, remember the store. Apple's model for downloaded music is genius, and before you write it off as just something that exists in the world, remember the "revolutionary" methods that were attempted by all the other companies in the world before Apple decided to start selling songs at 99 cents per? Yup.

And to round it off, iTunes does include some "features" that were originally very esoteric. Like equalization, which you can store different presets of for different things. It also does play a few of the more obscure files, not that most people would need them, and even includes a tool to convert them to mp3 files in case you're a bit obsessive compulsive like me.

Apple's iTunes is a fantastic offering from Apple, and quite frankly, you aren't reading this review, because you already have and love iTunes.
Did you find this review helpful?yesno
»

Apple iTunes
5
iTunes is a free music storing software made by Apple Inc. that comes installed with all mac computers and that are available to download for Windows as well. It's purpose is to store music for you to listen whenever you want. You can store music as organized as you possibly can with the composers, writers, track number, artist, etc. You can edit it all very easily. iTunes is the best music storing program in the internet because of all its options to edit your music and the cover flow and a wide range of storage space. What Apple could add is the option to change iTunes' color of icons, or selection highlight or the whole setup to change it up a little for people's likings. The program is a free download and it's the best music storing program out there and the most famous. What iTunes really makes money off is the iTunes Store that has over a million songs and over 30 different genre's for people to choose from. The precision and sound quality are amazing because you can hear every possible sound on a song but it all really comes down to the speakers/headphones you use to listen to the music. There are many other music storing programs out there like Windows Music Player, etc but they don't compare to iTunes' layout and stability. This was the first model I tried because it was the only one I knew and it was great and it has improved as time advanced. Apple Inc. has done a great job improving iTunes and still improving it. Out of all the programs out there iTunes is the best choice for storing your music and listening to it.
Did you find this review helpful?yesno
»

Apple iTunes
5
I've using Apple iTunes music playing software for about four or five years. ITunes has become the most used piece of software for playing mp3s and other audio files. It will organize all your music and you can also make play lists. Just about everyone who has a computer, whether it be a PC or a Mac, has and uses iTunes regularly. It is extremely easy to use and of course will synch up with your iPod or iPhone. Apple iTunes is a free piece of software that you can download from the Apple website. I can truly say that I don't really know anyone who doesn't use iTunes for some reason or another. I personally have all of my mp3s loaded into iTunes, and use it just about everyday when I want to listen to music on my computer. I haven't ever used another piece of software like I use iTunes, but Windows Media Player and other programs like that are similar, but aren't as user friendly and easy to use as iTunes. ITunes also has good equalization and comes it handy when you want to store EQ on certain files that may not sound as you would like on your set up. It will also show the album art work of what you listening to, and allows you to store all types of meta data within each file, including for track title, artist name, album name, year, track numbers, general comments, and more. This makes it easy to organize all of your music and no one who uses their computer to listen to music should be without it. It is free and it is clearly the most well put together program for listening to music that is available. If you don't have iTunes, I strongly recommend trying it out for yourself. I promise you won't ever go back to whatever you were using before!
Did you find this review helpful?yesno
»

Apple iTunes
5
I have been using iTunes ever since I got my first Mac 6 years ago. What I like most about iTunes is its compatiblity with other Mac applications. Making movies with iMovie or editing music in GarageBand, You can take songs straight from your iTunes library and include them in your projects. What I dislike about iTunes are the constant software updates, which are for new store applications and such. I have stopped updating mine from verison 2.2 and find it to suite all my mp3 playing needs.
iTunes can also play .wav, .aif, .aiff, .mp4, and other various types of music files. iTunes also has a audio converter making it easy to convert files to any size mp3.
iTunes has a large store which has millions of music titles for sale for 99 cents a song. The store also has movies, television shows, and applications for your iPhone or iPod.iTunes store also has a large selection of full albums for sale at a discounted price, rather than buying each song individually. The iTunes store also has a automatic artwork finder for any album you load onto your iPod.
Other functions iTunes has is the ability to share your music library with users on a simliar network. You can play music from one computer on an other computer plugged into the same network. This is helpful for sharing music within the same household or across a university campus.
iTunes does not work with any other media player than an iPod. But with an iPod there are many controls such as automatic update which makes it easy to manage your music library.You can also select a manual update to pick and choose which song you want to add to your iPod.
Itunes is a great application for managing your music and overall multimedia library.
Did you find this review helpful?yesno
»
Read the 10 user reviews on the Apple iTunes »

Other names: itunes, i tunes