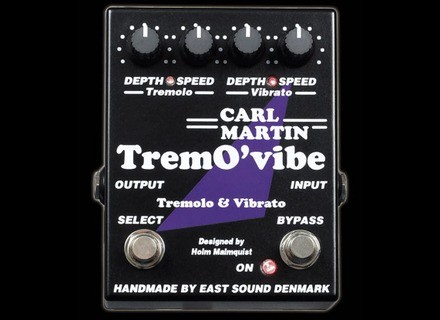 TremO´vibe, Multi-effect or other modulation effect from Carl Martin.

All user reviews for the Carl Martin TremO´vibe

Average Score:5.0(5/5 based on 1 review)
Value For Money : Excellent
Not satisfied with those reviews?
Our members also liked:

megalf's review (This content has been automatically translated from French)

Carl Martin TremO´vibe
5
As its name implies, a tremolo pedal that makes or vibrato.
2 knobs for trmolo and 2 to settle for vibrato speed and depth. A bypass button and a button to switch between the other end.

Nothing simpler. Few settings, but very ffective.
I did not look the manual.
Little originality it has no external transformer, it plugs directly into the 220V.

I think the key word of this effect is "transparency." I think it does not alter any of the original sound of the instrument. It may not seem like much, but I tried other pedals like, which literally ate part of the sound. The bypass is also very pure.
I use it with electric guitars, and with either single or double coil, clean sound and distorted sound rendering is fantastic.

I bought 2 weeks ago.
What I like most is the simpllicit and transparency effect.
I had several other models before, but none was so pure, and with such a nice sound reproduction.
The only default if we find is that it is massive enough, but hey she looks extremely solid.
Good quality price.
Without hesitating I buy the same!