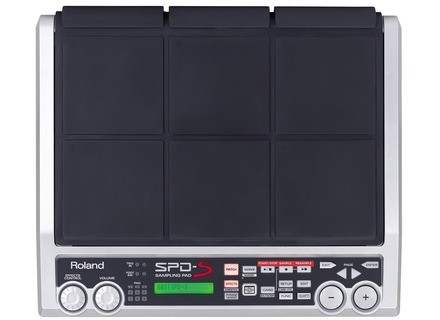 SPD-S, Multipad from Roland in the SPD series.

Roland SPD-S
4
The Roland SPD s is a drum/ sampling pad that is really affordable. It allows you to bring some of your drumming into life in your music without having to go out and pay for a large drum set that will take up a lot of room in your home. This is the perfect tool for a drummer who wants to lay down some great drum patterns and cant afford a real drums set or just doesn’t have room to put it. It is also small enough that you can take it almost anywhere with you and because they are pads and not drums, there is no “real” sound. So you can put some headphones in and start playing and people around you cant hardly hear a thing.

Set up is really easy, it comes with the ability to play up to 8 different sounds simultaneously on 6 different pads. It comes pre loaded with over 150 different drum sampled sounds that you can use right away and they don’t need much eq’ing.

The sounds are good, there is even an sequencer right on the device so you don’t have to slave it to another outboard sequencer if you don’t want to. So these means that if you want you can use it as a stand alone device and don’t have to have anything else running it or sequencing what you are playing because it can do it all on its own. It has the ability to import .wav files from your computer (pc or mac).
Overall, this is perfect for someone like me (who doesn’t have room for a drum set in the apartment). I can lay down some really good drum grooves and record them, then I usually track it out into another sequencer so I can start adding some bass and other instruments to the drum patter that I made with the Roland SPD S. Not to mention that this machine doesn’t cost much either.

Roland SPD-S
5
The Roland SPD-S is an electronic drum pad that's made for triggering samples. It's designed to be placed within the context of your drum kit so you can have access to electronic drum sounds on the spot. I don't own this and I'm not primarily a drummer so I don't plan on owning it in the future, but I recently did a recording session where the drummer had one of these and was using it within his full kit. A lot of drummers would overdub stuff like this, but I guess if you're used to playing with it live anyway and it's a big part of your rig, you might as well use it like a real drum. The SPD-S has six pad in total in addition to three edge triggers, and you can play up to eight sounds at once. It also has a ton of preset sounds and effects, so it's definitely a fully functional drum pad in itself. One of the best features of it has to be the 12 minutes of sampling it has as well, giving you an endless array of possibilities. Again, I haven't gone in depth with the Roland SPD-S as most users will, but I've heard it and seen it used enough to know it's potential. As far as I've seen, it's one of the most complete drum pad triggers I've seen. It's hard to go wrong with a Roland product in general as they make some of the best gear available. The SPD-S is definitely included amongst their best work as unless you're looking for more pads or more control, this is pretty much the perfect drum pad to add to your kit. It's probably only worth it for those who are triggering sounds and samplers all the time, but either way it's an awesome tool for any drummer to have.
Did you find this review helpful?yesno
»

Katon's review (This content has been automatically translated from French)

Roland SPD-S
Hello I'm a drummer for my percussion group,
I seek desesprement Roland SPD-S used to strengthen my kit
Thank you
Katon
Did you find this review helpful?yesno
»

sonic75's review (This content has been automatically translated from French)

Roland SPD-S
2
Blah blah blah ... First the output level is too low, the effects are quite mdiocres the sampler part is very limited and the quality of finish is zero. Ah the good old days of the 90s Octapad ... It c'tait top and the sampling y'avait real samplers!
Did you find this review helpful?yesno
»
Read the 12 user reviews on the Roland SPD-S »

View all 4 videos of Roland SPD-S »

Roland SPD-S manuals and other files