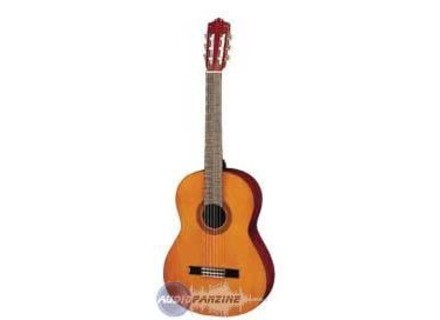 CG100A, Nylon String Guitar from Yamaha in the CG series.

Yamaha CG100A
5
I bought this guitar from a local music shop in the UK in 1991 and paid something like 120 pounds sterling. I tried out several other brands and this Yamaha had the best 'feel' and the sweetest tone. I'd previously owned two other classical guitars in the same price range, but these were not as good as the Yamaha.

It still looks as good as new after thirteen years of regular classical style finger-picking. It stays in tune for days on end, has a beautiful balanced tonal range with a good crisp sweet tone across the whole register. It also has a good sustain.

I like everything about this guitar, even after thirteen years, and can find no fault with it. The third (G string) sounds not quite so bright as the other strings. The only other miniscule comment is that recently I've noticed a very faint 'bloom' appearance on the sides and back of the body at the wood/varnish interface; this can only be seen in bright sunlight at a particular angle,and doesn't detract from the appearance one iota. I suspect its a sign of ageing.

The finish, appearance and build of this guitar are excellent. There has been no movement over thirteen years; no cracks/warping/ fissures/ neck movement/ deterioration of finish. Great build quality!

A great guitar for the price I paid. I'll never part with it. I'm buying a steel-stringed jumbo (a Cort) in the near future to play blues on, but only as a contrast to the nylon-stringed Yamaha.
PS: I've also played a Yamaha trombone for ten years,and currently have a Yamaha keyboard, both excellent instruments.