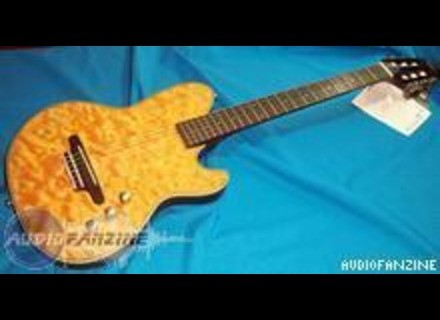 TMX20, Other acoustic-electric guitar from Ibanez in the Talman series.

cheyenne-toulouse's review (This content has been automatically translated from French)

Channel end, trs enjoyable to play, type ibanez solid bodysuits
good quilibrage gnral
guitar amazingly lgre
As for the sound! a marvel, my MODEL MODEL is a steel string, but I have a sound close to the nylon! nothing to do with an electro acoustic classical because it has a body of solid body. Really original, and a real rgal!
Playing on SETTING THE guitar and possibly a pdalier, micro piezo switches between a typical sound of a folk sound of Ovation!

The sound obtained agree all types of music
Its good jouabilit it a perfect instrument for scne
Excellent crystal clear sound, can be a little lack of gain in the bass, but is easily corrected on an amp or pdalier.

January 2010 EDIT: I just change the micro piezo, which I sadly damaged by trying a few manipulations borked ... The sound is back to visit, and most importantly, user manual of micro allowed me to understand how it works: I thought the vibration was transmitted into the mass of nut to micro, which is false ... in fact, the vibration of the saddle him even in its cavity, which activates the piezo, and my saddle s'avrait silent lgrement rop off a ct ( retracted "in force" in the cavity), which had the effect of vibration of the attnuer l ct o my lack of EHJV in serious ... Aprende is all ages!
So, APRS dlicatement have reworked my nut, I redcouvre compltement the great sound of this instrument, with now a perfectly rponse Galise between strings and treble!

I have a few months, and I love the look of electric while maintaining a sound that would Phra jumbo!
It is found today from 300 euros. Why miss is a real gem!

January 2010 EDIT: I have for some years now and I must admit that my opinion does not volumes of as much as I rpar few concerns she had EHJV ). Strangely, since this is no longer manufactured MODEL ETC augment its ... APRS research on the internet, I found new MODELS sell between 350 and 450.

Other Ibanez other acoustic-electric guitars