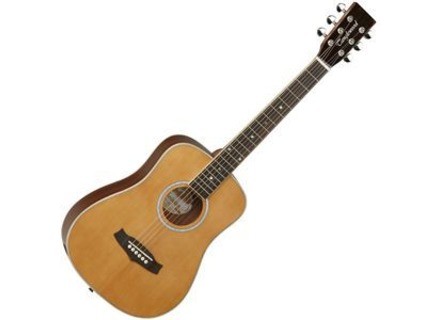 TB Baby, Other Acoustic Guitar from Tanglewood in the Evolution series.

poloHnd's review (This content has been automatically translated from French)

Tanglewood TB Baby
5
Little baby / travel home Tanglewood. The brand is English, but even if the seller tells me she's made in the UK, I can hardly believe it: with a price -from 130, I look for the Made in PRC possibly on specs UK.
The handle is not too round, rosewood fingerboard with dots that make pearlstyle good effect.
The back is in two parts, the Working violin is very correct: no approximation in the assembly, freight his property poses and do not hurt your fingers.
The mcaniques are average, but the guitar holds the agreement.
It comes with the correct strings without gigbag what is for me the main black dot. We can negotiate one with the dealer but as it is a baby (ie. 3/4) it rarely sounds spot. This is something even more important that the baby is destined to move with you. On this point Taylor did better that his book with the bag adapt.
I put 7 because of the MCAS and bag.

The handle is very easy, puts your thumb and fingers glide well without difficulty. The box is quite small and thin and encourages lean forward to press against the guitar itself causing neck pain del hour of play. Trslgre and it plays well up. For comparison, the backpaker Martin offers bcp rounder and hard handle and trsdsquilibr weight. On this point the little English is as good as the Baby Taylor and the new Baby Martin.
Access to calamitous treble.
9/10, it does its job.

The sound ... I wanted a 3/4 that accompanies me everywhere. I tried qq prior to the models and if it is not the best "any GRADE" it offers the advantage of being fairly balanced to be default powerful (chtite cash requires).
The highs are crystal clear without also be on Taylor.
The bass is round without being as deep as Martin knew.
And notes are harmonic wads.
The sustain is very correct, the notes do not die in the second and even a nice life expectancy.
8/10 scale due to lack of sound, even if I am aware that it gives everything she has with his half (?) Fund.

Bought when I was in France for the feasts, I use it for a month without dcption, even though since I rentr home, I tend her pr frer my folk and my electric fullsize.
But I am very happy with this CHOX the quality / price is very good and allows for an instrument without lugging head outlet.
I tried cousins ​​at Taylor and Martin, which provide more sustained benefit more lev bcp price: everyone to make their choice.
I bought a classic Central amrique Stagg 3/4 everything that sounded good ($ 35!), But I let a child and I have more trouble with the conventional (that is another story).
9/10 the overall always that gig-bag makes default, English gentlemen are going, failing to draw first you rotten toffer some prsenter us your offer for a product without fear (competition) and without reproaches.
Did you find this review helpful?yesno
»

Tanglewood TB Baby
4
It appears to have been manufactured in the UK. surprising but not pk.

I want to say that at this price I bought it used, with a lot of hits and an easel off ...!
The handle is similar to a round elctrique telecaster type guitar. Very thin but very playable even for an adult despite his pitch 3/4.

The violin is generally hyper correct. Much better than the version of Roadser TWRTE I too. It includes all of binding, a very clean finish.

I count it up a lil LR Baggs Element piezo type, we'll see what happens.

I had originally purchased as a gift to my little sister who comencé guitar and is struggling to hold a folk four quarters with mini bars. I fell fan and suddenly I care and I bought one for her ...

Super nice handle. and super easy to play because the short scale makes much softer strings. I use the same Martin Light 80/20 12/54 on my D45 and it is much less sore fingers. Ideal for work lines for hours without bleeding everywhere.

Access to acute is as rotten as 100% of folk without cutaway. But hey no one buys it to play Iron Maiden ...

ergonomics is really good and not small gabari gene comfort. I've tried the travel guitars on where the operating cash asked me no problem. Not at all.

As I had said I had with chelavet off. I think this is a fault on these series because on my other small Tanglewood, the edges of the bridge are also slightly loosened. Suddenly I reponssé, drilled and reassembled glued / screwed with two small bolts on the sides discrete mode. So, it increased the bridge which cuts a little high and gives a rounder and softer sound the best effect. Moin crillard than the original and more harmonics. The sustain is also very good for this kind of pitch.

For transport it is great. very light and easy to move in its cover (barely 1m high standing in her case). In addition, when the door backpack scooter, the head does not exceed the headphone and therefore it makes no annoying wind taken.

The tuners are very good, best fan on the roadster series. And this is important because short forks are more difficult to tune, more sensitive.

It is suitable for all, but extra guitar. I also use the studio to add small treble sounds on my accompanying grid references to J45.

Or she is the least comfortable, is on rytmiques in open chords because it lacks bass (obviously saw the body) of projection. But this is not a main guitar.

however super friendly on small solos, and short scale allows large bend like an electric without getting an index carpaccio ...

I use it for about a month. I had a mini earth Cort and Tanglewood TWRTE and I prefer this one. Its richer, softer and much more neat finish. btw I'll equip it with a piezo for plugging me everywhere in case of ox improvised.

A great little guitar to carry around

poloHnd's review (This content has been automatically translated from French)

Tanglewood TB Baby
5
Small baby / travel from Tanglewood. The brand is English, but even if the seller tells me it is made in the UK, I can hardly believe it: with a price of 130 €, I expect that it is Made in PRC and possibly spec'ed in the UK .
The neck is not too round, rosewood fingerboard with pearloid dots that give a nice effect.
The back is in two parts, the luthery is very accurate: no vagaries in the assembly, the frets are well located and do not hurt your fingers.
The tuners are average, but the guitar is agreeable.
It comes with strings gigbag correct but what is for me the main black spot. We can negotiate with the dealer but like a baby (ie. 3/4) is rarely sounds spot. This is something even more important that the baby is destined to move with you. Taylor makes this point better, who delivers his with the appropriate bag.
I put 7 because of the tuners and bag.

The handle is very easy to place your thumb and fingers well off without difficulty. The box is quite small and thin and encourages us to lean forward to press against the guitar itself causing neck pain beyond the time of play is very light and plays well up. For comparison, the backpaker Martin offers a more rounded and bcp handle difficult and a very unbalanced weight. On this point the little English do as well as the Baby Taylor and the new Baby Martin.
Access to disastrous highs.
9 / 10, she does her job.

The sound ... I wanted a 3 / 4 with me everywhere. I tried this one before qq models and if this is not the best "all categories" it offers the advantage of being fairly balanced if not powerful (Chtite case requires).
The highs are clear without being as crystalline as the Taylor.
The bass is round without being known as deep as the Martin.
And notes are full of harmonics.
The sustain is very correct, the notes do not die in one second and even a nice life expectancy.
8 / 10 because of lack of depth of sound, although I realized she gives everything she has with his half (?) Fund.

Purchased when I was in France for the holidays, I use it for a month without disappointment, although since I got home, I tend to prefer my folk and my electric fullsize.
But I am very happy with this CHOX, the price / quality ratio is very good and allows a device to carry around without headaches.
I tried the cousins ​​at Taylor and Martin, who provide more sustained benefits at a price higher bcp: each to make his choice.
I bought in Central America a 3 / 4 classic Stagg that sounded quite good (for $ 35!), But I left a child and I have more trouble with the classics (that another story).
9 / 10 to global always this gig-bag is missing, let the English gentlemen, failing to take the first you could expand a little for us to present your offer a product without fear (competition) and without reproach.

jofal62's review (This content has been automatically translated from French)" Super nice and very pretty."

Tanglewood TB Baby
4
English brand, manufactured probably in Asia.
Nice handle, as electric, properties put frets, fast neck and comfortable, mechanical type grover, oil bath, D'Addario strings of origin, contrary to previous opinion, I took version DLX ( deluxe), ie massive table and delivered Tanglewood gig bag handy.
Aesthetically it is a success, with inlay rosette, binding, head of the embedded mark, finishing with cons suggests defects, but the price is so very correct, we can not have it all. Channel

super easy action set low and nickel, no frieze, bends super easy to make, perfect for playing blues. the weight of the guitar is nonexistent, the ideal size to play anywhere, including on the sofa, access to treble is like a folk, no!
The sound is good it lacks bass but that's normal, given the size of the fund, however, the nuances of the game are finely rendered.

Typed blues sound, which corresponds to my expectations, more for the melodies and solos for rhythmic. I deplore the lack of bass.

I've had a few days, I was tired of my big folk dreadnough, not comfortable to play, I wanted a cheap little guitar, I particularly like playing solo, make slide , bends etc. .. with this guitar, something I did not do with my size folk classic.
excellent value for money, more beautiful than the Cort travel in my opinion.