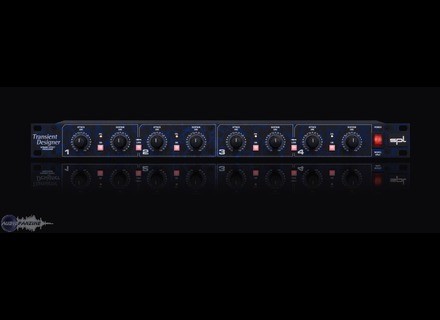 SPL Transient Designer 4
5
The SPL Transient Designer 4 is four channels of a unique dynamic processor that works by affecting just the transients rather than the entire signal. It's an analog piece of gear consisting of XLR connections for both your input and output for each of the four channels. It is a rack mountable piece of gear and will just take up a single space in your traditional rack casing.

The make up of the SPL Transient Designer 4 couldn't be any easier than it currently is. Each channel just has two parameters to affect your sound - one for attack, and one for sustain. That's literally all that it has to work with, which is a beautiful thing when it doesn't what it can do as is the case here. No manual should be necessary here...

The SPL Transient Designer 4 affects your sound unlike any other dynamic processor out there. It's almost like a magic box, as most things you put through it end up sounding good on the other end - especially drums. It's awesome for cleaning up a signal a bit and getting a tighter overall sound. That's way is so great on tom tom drums and other applications like it. The studio that I work at has one of these, although I've yet to use them or see them used too much for any other application other than drums. This is a great mixing tool that can save you when you need something to cut through a mix...

generalk's review (This content has been automatically translated from French)

SPL Transient Designer 4
SPL Transient Designer is a formidable device since it allows having drum ultra striking but must have the use wisely ...
It may have the effect of a gate or as a comp with 2 button per channel only, you can very easily sculter the volume of the attack of a percussive sound, and its resonance ...

very simple to use

exceptional quality except in extreme settings it does not abuse

MaZar's review (This content has been automatically translated from French)" Forget plug-in SPL!"

Given the number of buttons, I think I have nothing more simple in my studio!

No loss when you go in, no staining.

But it is a fabulous tool that will trace the Rooms of your decision by filing its battery attacks, attacks subside electric basses, will add to the attack samples Electro too compressed while keeping the sustain or not same for acoustic guitar!

It is really possible to scuplter attacks and decay of what you spend it.

I use it for 7 years. He saved my life more than once.

I had the opportunity to test the plug-in SPL and I said "hey cool, I can sell my machine, earn money and buy Christmas gifts!" but in fact it is so much less efficient than hardware version that I quickly forgot this idea ... And even when I'm too lazy to connect 2 cables on my patch, I prefer to use the Oxford Transient Modulator works best the plug-in SPL except that this time, I put my Transient Designer to take on my microphone Battery overheads and I can not do without.

For the price, I think it is largely justified for 4 channels.

J.a.h.n.o's review (This content has been automatically translated from French)

SPL Transient Designer 4
5
C But what this UFO??
the TD and a new type of processor in SPL dynamic controller that allows the attack and sustain sound thanks to just two knobs!
it is analog,
can boost or cut of 15 db and the attack boost or cut 24 dB sustain,
this machine is unique in the world
was 2 or 4 lines of work that are linkable in pairs,
XLR connector only, +4 dBu, 1U 19 ", an LED to control whether a signal passes
He aimed particularly at its percussive, and particularly acoustic

So l!! at the config can not be simpler: a knob for the attack to sustain a knob, no treshold as a comp, everything is automated as spl knows so well how to say musically ca,
Even someone knew nothing could happen to leave something good: c more simple attack? turn the knob to the right attack, more sustain? sustain the knob to the right and vice versa, extremely simple
c raproch or as if the microphone is moved away from the source with the attack and as if shot or the addition of the atmosphere (piece) with sustain,
c processor dynamically easier to adjust that I know ... watch your rigth mm a digital recorder

Pfff .... C of the bomb, kick your lack of energy?? You sick and tired of spending time on your gate was adjusted to fit on the overhead ????, it was placed too close there are too many Attaq ?? your bass is not clear enough ds mix?? you want a good finger on the string bass? guitar sharper or softer with lots of sustain ??.... could still go on all the sources as simple instrument can benefit from the benefit of the transient designer, and this in time to play with the Attaq and sustain your sound now, forget the bad gates here will give you a machinequi Attaq massive clean lap top in 10 seconds! or you cut the sounds of ambience without the fuss!
the best example is a battery, we do what we want or we remove raproche microphones with a knob, cut sounds that trainnasse (toms. ..) always with the ease and rapidity of concertante,
for electro sounds are even fighting over compress your grossescaisses such por boxes alllez a lil shot td revamped for once and give them a new dynamic life! always sounds like the TD, and me too, because that always makes me more beautiful in like 30 seconds
for her it must really listen to believe it, c the SPL so I think no need to c that c right, clean, no frills: it sounds ...
oh yeah I forgot you have fun spending your reverb in one of the canals and traffics to give special effects ecxeptionnel (a short reverb and a percussive attack and reverb without very long )....

I use it for over 2 years now, I was initially very skeptical about the gear but the importer told me "listen, take, try it and if you do not like to refer to me! "
he did not take very long (5 minutes of meeting of mix) to understand that its going to be one of the key machine of my rack,
what I like most c the ease with which it restores Attaq a sound, he gives the cup or sustain, and I insist even a beginner just use it without any notion of compression .. .
a meter or a LED display of the volume would prtic but the little LED is sufficient
I have the 4 channel version and the price quality ratio is very good for a smaller budget the vesion 2 channel will be more appropriate ...
I repeated this machine is unique in the world, people who often works on batteries or live in the studio should have one (beaucoupd'enorme studio work with very large as well as drummer Dennis Chambers, Simmons ....)
I do not know how I would have done if I had not had c the machine if you have no compressor or read a good compressor and a good gate ...

Did you find this review helpful?yesno
»
Read the 5 user reviews on the SPL Transient Designer 4 »

Published on 11/26/14
Plugin Alliance has launched its Black Friday sale, with 22 plug-ins available for $99 each until November 30th.

Other SPL other dynamic processors