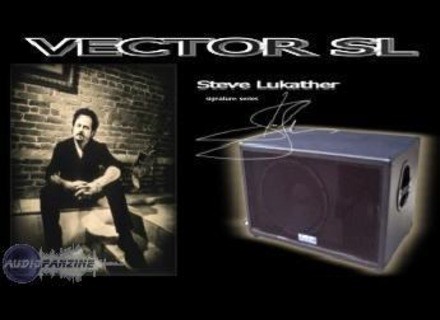 Isp Technologies Vector SL
2
I use this cab for a few months.

Briefly describe this cab is difficult to be objective. Let's start with the characteristics:

cab 1x15 "
hp Eminence Legend 15 "
active speaker 600w rms (with special principle)
The principle of the ISP is a little different. Indeed, you enter the cab directly from the hp output on your receiver, the signal passes through the ISP who takes the bass frequencies, amplifies their initial grain through an integrated amplifier, and it makes the sound and staying power on its output that you connect to your normal cab.

it sounds simple but it becomes a puzzle because the sound was coming out of the weighted frequencies and gives a different outcome. Forcing, if you want a good efficiency, to have a second cab to turn him in normal mode. it involves a lot of stuff for a standard lathe and offer some puzzles when the choice of your configuration.

For those interested, I slip a little further information. Behind the beast, it-is a volume knob is the only setting you can influence. But, ironically, the volume reacts to the input signal and is aligned with it, so at most you pull the bass a little forward in the amount to be fake, but it never becomes dominant the noise level.

At the sound, the result is interesting. The sound is massive and full, with a beautiful roundness. The signal is boosted in serious but extends smoothly. By-cons, again the sound of the cab connected to the output of this gear will be critical. I could get nice results with hp Eminence Legend (quite round at the base) which became a little more crunchy and British, but on some celestion,
it becomes infected. On stage and say, you do not get special gear. As it is under your set, it vibrates your socks in normal times. It really makes the impact of the vehicle when transplanted the sound of this speaker on a pa. We then realized that broke the sound barrier ... in combination with a normal hp that works, we get the real big sound, good pro, solid, and palms that remain mute defined (in fact, the membrane vibrates actively, which means you can "play" the palm mute) and the muting signal serious extremes well defined.

Level perf / price ratio, the ratio is largely exaggerated. Indeed, a good cab with an Eminence 15 "is available at a cheaper price and it will be just as good of a hair. In short, it is a choice. Above all you must connect a cab output, which require you, if you are a perfectionist, take away a second cab, which will run in normal mode ... it's not up when you do three concerts a week.

(4) The tearing, but not in arranging config. Choices to make informed choices.
Did you find this review helpful?yesno
»