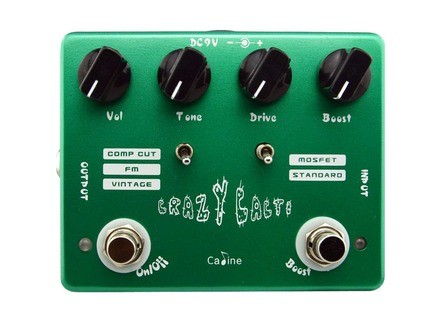 benoi31's review (This content has been automatically translated from French)"For the price, hard to beat"

Caline CP-20 Crazy Cacti
5
This is a clone of Fulltone Fulldrive 2. I unfortunately could not compare the two pedals. We are on exactly similar settings, in short, is the limit of the shameless copy, but ... When you think the number of muff clones TS9 or otherwise available, it&#39;s hard to blame them for popularize quite expensive pedals like this one.

So this is a pedal itself inspired by a TS9 (like when talking about copying ... ^^), we thus find the classic three buttons on a TS9: volume, gain, tone.
Then there is a choice of different switches via 2 "mods" (simple) of the pedal:
FIRST SWITCH:
- Comp cut: cut the gain stage, the pedal becomes simply a rather transparent boost that will bring color to your sound
- FM as "Flat Mids" changes a little EQ to let mediums "flat"
- Vintage: similar to a classic TS9 with strong staining in the midrange
SECOND SWITCH:
- MOSFET: simply means the type of operational amplifier used with a MOSFET, the sound will be right
- Standard: classic AOP a tube screamer, more mids and warm

In addition to these three switches and controls, it also has a foot activated boost that will increase the saturation of the pedal and the volume. As a second TS9 downstream.

From an aesthetic point of view, the pedal is ugly (bim that&#39;s done), but it is strong (of appearance). However, when we look in detail, it has very standard and low cost switches components to be quite fragile my faith ... The welds are correct but nothing more. At the same time the price was still the luxury! (Buy separate pieces you couterai more expensive than the pedal!)

Some time we began to find its feet. There are many switches whose effect is sometimes subtle (especially MOSFET / standard on some configurations) .... It usually ends up finding a switch configuration and stays on (FM and MOSFET for me)

The tone control is particular, its share is still quite small, no drastic changes, turning from one end to the other.

The boost is managed quite easily too, the major concern is the need to adapt the volume of basede the pedal. Therefore there may be two sounds: a typed rhythmic low volume / high volume to another with more gain. Not possible to increase the gain without increasing the volume (but hey normal is a boost)
Damage thing too, one can not use the boost without the overdrive, so do not expect to have two pedals in one.

Oh, and as so often with Caline, the LED is terribly strong, and bursts eyes when you look ... A little more resistance would have done good

The pedal has a warm sound and super soft, so she will not be suitable for all configurations.

For example, if you play a Les Paul at an Orange amp (I had to base), it&#39;s really not a good idea to use this pedal as overdrive ... You will get a hyper sound bassy without treble, and it will take up thoroughly on the treble tone (already not very effective) ... While my vox slightly more acute / Chimmy was bingo!

This pedal is made to sound enough acute / end database you want to warm up and fill, typically a Strat into a Fender amp with that, it&#39;s bingo, you went to the SRV or with the boost of the sounds couillus to ZZ Top. The pedal will give you a warmer sound and "full" at the humbucker which can be really nice in some situations

I changed meanwhile guitar for a Les Paul in P90 and is returned hyper interesting to use.

The boost is really nice and can give you a kind of creamy fuzz riff ideal for the large or well connected solos.

Personally, I find it really sounds delivered by this great pedal and quite worthy of a tube screamer, you just pay attention to your setup, which should not be too loaded mids / bass base.

A fault: vintage + standard position, I have a huge drop in volume, which is apparently normal, but that bothers me really personnellement.Il must put the volume knob almost fully to recover to its normal volume. So I almost never&#39;m using it.

I did not know too much TS9, and I told myself history to die con that I would try, and my faith this pedal gave me a good overview of this legendary pedal!
We find the hyper Round signature sound, warm and soft to Ibanez, which suddenly does not fit all configurations.

The boost and switches give you a little more opportunity to test a few other functions, including the boost which is really nice.

As a group, it is a treat to get out a bit of mix and send some heavy riffs with a configuration not necessarily made for initially, and we can find the sound signature full of artists who have worn and abused this pedal, Stevie Ray Vaughan is really an example out most in my ears.

For 45 euros including FDP, less than a third of the price of the Fulltone, and less than half a TS9, I think it&#39;s really a pedal top to have in your arsenal!