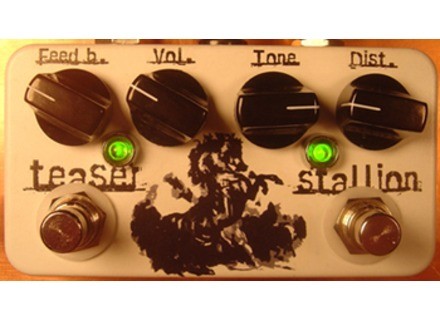 Catalinbread Teaser Stallion
5
Product Details: Standard MXR-sized box with jacks on the sides and power on the left side. Box is white with a horse graphic that makes you want to ride into Valhalla.

I've been playing guitar for 25 years, mostly in rock, metal, punk, alternative, and lounge bands. I like most kinds of music.

I bought this pedal direct from Catalinbread for $159.

As a distortion, this pedal is full-on awesome. It's like using a pair of steel balls to teabag an atom bomb. Very rich and musical, like what you always wished a RAT could be when it left you feeling inadequate, with usable tones at low and high gain settings n' stuff. The feedback/oscillation feature is fun--it kicks in quickly on a fedback (?) note and you can control the pitch by changing the volume at any point before the pedal, like your guitar's volume knob. I may find a place for this in a song or two, but what I think is cool about this feature is how I can use it to dial in a juicy, thick, bloody tone like a porterhouse milkshake. Here's what I do: Turn the oscillation switch ON, then turn the feedback to the point where it's just total mayhem, then back off. I turn the timbre tone between 8 and 11 o'clock and it's gold.

Did I mention this pedal takes 9-18 volts? I'm powering it with a Pedal Power ISO-5, which has an 18 volt output. This pedal just screams.

The timbre control seems to not change much after one o'clock. I don't particularly like having the power jack on the side. The feedback effect is very particular about what it eats, and if you have anything affecting the signal before it, it may just puke out a monochrome mess.

I don't know where else to put this, but I tested this pedal with Ernie Ball Silhouettes--one with a Duncan Pearly Gates in the bridge and the other with stock single coils--and a Reverend Club King 290. Amps are an Egnater Rebel 30 and Vox Valvetronix 15.

What makes this pedal special is the feedback loop, but what I like most about it is the awesome distortion and how I can tweak it to give me a unique tone. Then, when I want to 'get my freak in' as the youngsters say, I crank the feedback knob and--23 skiddoo! Despite having some minor dislikes about this pedal, those things are not enough to distract from the excellent tones, unique features, and infertile equine awesomeness.