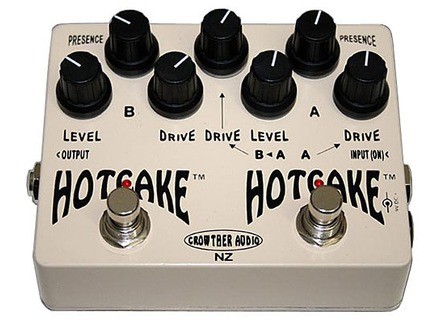 Crowther Audio Double Hotcake
5
The Crowther Audio Double Hotcake is essentially the same pedal as the popular Hotcake, but there are two separate modules of the overdrive in here. One of the sides is the Hotcake and one is the Blueberry. It's an analog pedal that has 1/4" input and output jacks and a nine volt power supply jack as well. It's not rack mountable in any fashion as it's a stomp box.

The configuration of the Crowther Audio Double Hotcake is pretty easy to figure out. Each of the two Hotcakes has parameters for drive, level, and presence, and there's also a separate drive parameter for using when both of the modules are engaged at the same time. Each has it's own button to turn off or on. I don't know what the manual for this pedal looks like, but I don't think one is necessary anyway.

The sound of the Crowther Audio Double Hotcake is nothing less than outstanding! If you have used the regular Hotcake pedal, you definitely have a good idea of what I'm talking about. It's cool to have both the Hotcake and Blueberry in one pedal here, although the two modules are pretty similar. If you really want something with a kick, you can use both of them at once, but each one individually packs a lot of punch as well. This is definitely a versatile overdrive pedal to say the least!

There's no way you could go wrong with the Crowther Audio Double Hotcake! It's one of the best sounding and more versatile overdrive pedals out there today that I've used. The regular Hotcake on it's own is an awesome pedal in it's own right and will most likely be enough for most players, but those looking for more should look to the Double Hotcake. It's a bit less than double the price of two Hotcakes, so choose accordingly, but you really can't go wrong here if you can afford either one!
Did you find this review helpful?yesno
»