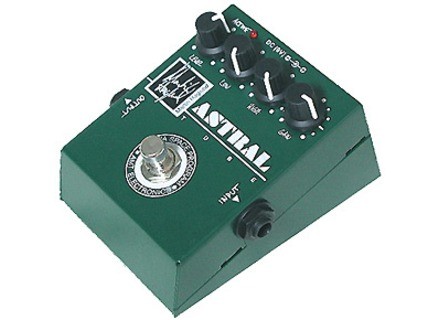 Amt Electronics Astral Tube
3
This is a distortion pedal made by AMT electronics. This is a Russian Company not particularly well known in the US and Europe, but slowly getting it's name out there. It's basically a tube distortion, or so it says. It has two 1/4" connections, and can be powered either by a 9V battery or an adapter. This is not capable of being edited or updated on a computer and cannot be racked.

Using this pedal is really easy. There are only four controls on it which makes it easier. You have volume which acts as a master volume. There are low frequency and high frequency knobs for adjustment. There is also a gain knob which in effect controls the amount of distortion that the pedal provides. It's a breeze to set up and there's really no need for a manual. The one that I tried didn't have a manual so I can't speak to how informative it is, though I doubt anybody would really need one.

This, quite frankly, is not the best pedal I've heard. It doesn't really warrant the name "Tube distortion" because as far as I am concerned it really doesn't sound all that tube to me. In fact, it sounds more Steve Vai-ish than anything, and as much respect as I have for that man's talents, his tone always sounded horrendously cheesy to me. This just does the same thing for rhythm and lead tones alike. Basically I have no way of getting a real tube sound out of my Strat, even with a tube amp like a Fender Twin! If it had a good sound, regardless of tube emulation, I'd give it a high score, but it has nothing really to offer that I'm interested in. It sounds way too 80s metal for me.

I was really disappointed, though I don't know why, as I didn't have to pay much for it. It really just was a waste of time and a little bit of money, as I couldn't sell it for what I paid for it! I basicaly would only recommend this to amatuers who want to sound like Steve Vai or Joe Satriani, though admittedly, it won't even do a good job of emulating those guys. I'd be better off with any kind of Analog Man fuzz pedal for real, or at least a Big Muff, that way I'd at least have some grit and power.
Did you find this review helpful?yesno
»