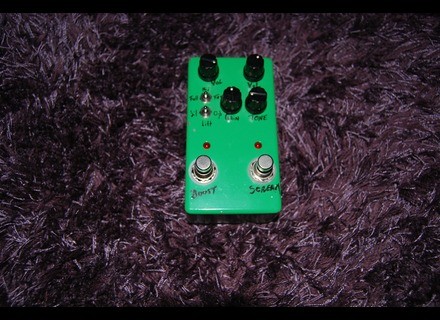 Build Your Own Clone Overdrive 2

Overdrive 2, Overdrive pedal from Build Your Own Clone.

Build Your Own Clone Overdrive 2
5
This is an overdrive pedal based on the famous Ibanez TS808 stomp box but with an excellent choice of modifications which allow you to get the most out of the Tubescreamer circuit.

-Overdrive and boost pedals in 125B sized enclosure

This pedal is a DIY kit so I'll split this section into two, Building and Using.

Building: I have built a few of these for various people and despite being a very cramped build I found it very easy. As always BYOC's instructions are easy to follow and offer troubleshooting advice to get your effect going if it doesn't work out right the first time.

The pre-drilled enclosure and board mounted pots and switches make this build very easy to do neatly because the only thing that needs to be wired are the jacks and footswitches.

Using: This is my personal favorite Tubescreamer based overdrive that I've tried. It has a ridiculous amount of tone shaping options in a small pedalboard friendly sized case. Standard Tubescreamer Volume, Tone and Gain controls along with three way clipping and EQ switches open up a world of possibilities that the original Tubescreamer never had.

Plus there's the independent boost side which can be used as an excellent solo boost.

The only thing I dislike about using this pedal is having to look where I step on it as the switches are quite close and I have large feet.

I've used this pedal with a Fender Highway One Telecaster and Marshall JCM900 amplifier and I personally think that these three things are a wonderful combo. Using the JCM set to a clean tone and the OD2 with a fairly high gain when it's kicked in it produces an amazing smooth overdrive tone, and with the boost pushing it that little bit further it's even better.

The LED option on the clipping switch produces a slightly more crunchy tone which works really well with the Marshall.

My favorite thing about this pedal is building it because it's nice to be able to build something that sounds this good.

I think the value for the price of this pedal is really good as you can get a much more versatile pedal (Well two pedals because of the boost) for cheaper than you'd be paying for a standard Tubescreamer.

The main downside of this pedal is that I can imagine some people are not interested in building pedals but there are lots of people (myself included) will build them for you for a small price.

Build Your Own Clone Overdrive 2
5
BYOC's most famous circuit has always been their tubescreamer clone. The wide range of available modifications to this circuit is beyond mind blowing. BYOC decided to step up their game and include their favorite mods in one build. This pedal includes various small toggle switches and two true bypass switches all housed in a single 125B enclosure. It's a bit cramped, but this is easily the most versatile 125B boost out there.

BYOC really outdid themselves with this build. Not only does it include nearly every mod one could possibly think of, everything is laid out nearly perfectly. If you want to increase the boost you're getting, all you have to do is step on the additional true bypass switch which brings this into insanity mode. To top it off, it's all housed in a small 125B enclosure that'll fit nearly anywhere on the pedal board. As always, the instructions are clearly laid out and easy to understand. If something were to go wrong, there are people on the BYOC forum that are more than willing to help you out with any issues that might occur. Just be sure to take clear pics, especially for this build. The components are a bit cramped in this. The reason I didn't give this a perfect score is because the 125B enclosure makes the two true bypass switches a bit too close at times. You have to pay attention to where you're stepping when hitting the switches.

The sound of this is absolutely insane. Not only can you have the famous tubescreamer circuit, but this has so much more going on. There are overdrive pedals out there on the used market that go for $500+. This can get those exact same tones and more for one fifth of the total price. For those wondering if you should get the MOSFET kit or not -- GET IT. It really makes this pedal open up even more. MOSFETs are some of the best clippers out there, and the additional few dollars is definitely worth the improved sound.

While this pedal is a bit more expensive than the normal builds, it's worth every penny. I highly recommend you get the MOSFET kit to go with this. It'll turn it into one of the best boosts you've ever heard. This kit is a little more complex, so I don't recommend this to absolute beginners, but anybody with some decent soldering skills should be able to easily assemble this kit.

Build Your Own Clone Overdrive 2 images

Other Build Your Own Clone overdrive pedals