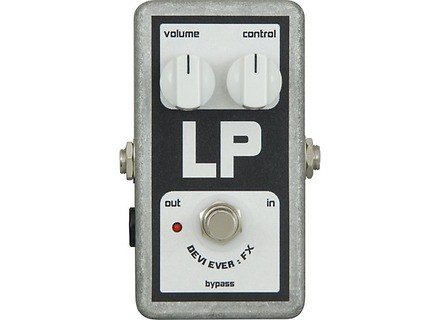 LP, Overdrive pedal from Devi Ever.

Devi Ever LP
4
The LP is an overdrive effect from Devi Ever. It sounds very similar to her Electric Brown overdrive pedal but with one huge difference, it has a random stuttering effect which sounds like a record skipping (hence the name LP). I really like this pedal because of the interesting textures than can be produced with it. To quote Devi here are the specs:

This unit isn't rackable as it's a stompbox effect with 1/4" input and outputs and a stomp footswitch to engage the effect.

This pedal is very simple to set up you just plug your guitar into the input and your amp to the output and stick a battery inside and you're ready to go. Another feature of this pedal which makes it simple to operate is that it only has two knobs one which adjusts the overall loudness of the effect (Volume) and one which adjusts the intensity and character of the overdrive sound as well as the amount of random stuttering effect (Control).

I really love the sound of this pedal. You can get a huge variation of the stuttering effect by adjusting the Control knob but also by changing the volume of the signal going into the LP. Hotter signals will produce more stuttering so by running a boost/overdrive pedal infront of the LP you can get a heavily stuttering sound.

My favourite sound from this pedal comes by boosting the signal before entering it and then putting a delay after as the stuttering adds a great effect to the delay in producing an interesting texture. I definitely recommend this pedal for people who like experimenting with sound.

Overall I like the stuttering effect this pedal offers the best. If you're looking for a straight forward overdrive which sounds like the Devi LP then check out the Electric Brown as it's the exact same sound but without the stuttering.

The only problem I have found is that it can be a bit random and finicky to get the stuttering sound as you want it but other than that it's great.
Did you find this review helpful?yesno
»

View all 2 videos of Devi Ever LP »

Other Devi Ever overdrive pedals