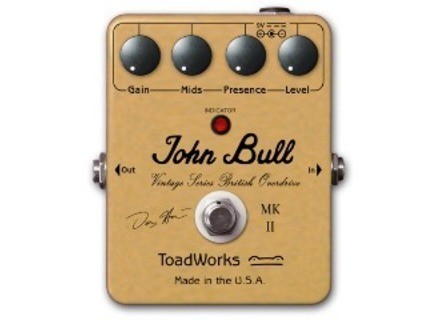 Toadworks John Bull
4
This is an overdrive, a replica of an old-school analog british overdrive. This is an analog pedal, and cannot be edited via a Mac/PC. This device is also not rackable because of the fact that it's a foot pedal. There are basic 1/4" inputs and outputs, as well as a 9V adapter capability.

The effects editing on this pedal couldn't be simpler, it's really just a two knob operation. There's a knob for gain and a knob for level. The setup couldn't be easier, and it's simple to edit on the fly. The manual is pretty much unnecessary.

I have had very different results using this pedal with a different guitar. For instance, when used with humbucking pickups, the pedal seems to toe the line between a heavy overdive and a lighter distortion. It's actually not the most ideal pedal in the world when used this way, my Les Paul isn't soft enough when I need it to be soft, nor loud enough when I need it to be really loud and distorted. With single coils, I tend to like it a bit more, it has a lot of power for an overdrive. I'd still say I'm not wild about the sound either way, there's not much diversity of tone and it tends to kind of remove some of the character of my playing somehow. I've played many overdrives that are far worse, but I've also played enough that are better to know that I don't need to hang onto this.

I didn't end up hanging on to this pedal for very long. I think that most of what I liked about it was the low-gain, overdrive sound. I think that in general, the tones weren't really distinct and bright enough for me. I really would have preferred something else over this. Some people might like the drastic differences in gain that are possible with this pedal, but I seem to prefer many others to it.
Did you find this review helpful?yesno
»