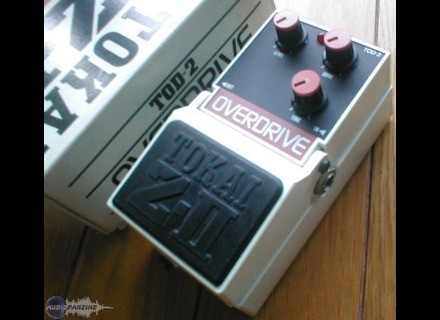 Jim92's review (This content has been automatically translated from French)

Comparing the TOD-1, the case has changed color, the LED lights is round and over and open the battery hatch is half the box (like a Boss)

Use could not be more simple, you press and it works right now do not need the manual!

Use with 9v battery or transformer type Boss. The opening for the battery is the same type of opening than Boss!

For beginners this chapter "A Quality Sound", I would like pedals that I compare this with a Boss SD-1, an Ibanez TS-10 Tubescreamer and a Tokkai TOD-1!

OFF mode (guitar amp branch via the pedals tint), no loss of the original sound of the guitar, the bypass (even if it is not true bypass), is transparent unlike the Tubescreamer who eats some frequencies and even a bit of clarity and attack!

PDAL Car: gain at min, it was a good boost with a little bit of gain!
"": Max gain, trs nice overdrive, with more sustain than the TS-10.
Tone button is trs trs effective and allows fine adjustment.

Compared with the DOT-1, the TOD-2 has a richer, thicker!

My opinion is that personnel.Je playing for 20 years now, I have a multitude of pedals Overdrive (Boss, Ibanez, Peral, Tokkai) home and pedals Tokkai trs are good!

After this comparison, I think putting my cot trs Tubescreamer quickly that I colored my guitars too!
The Boss SD-1 is closer to DOT-2 Tokkai. The SD-1 by more saturated against (gain background obviously)

The TOD-2 is really superb!
Did you find this review helpful?yesno
»