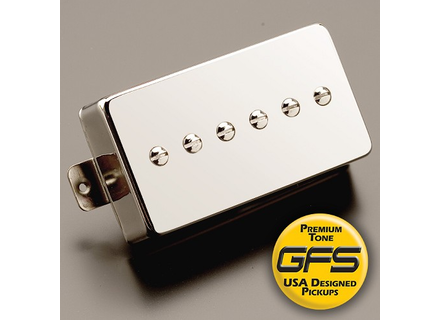 GFS Mean 90
3
General: the Mean 90 is a P90 alnico vintage wound pickup.
Output: the bridge pickup has an output of 8.8k.
Color: I play a cream soapbar bridge model.
Size: because it is a little larger than a regular single-coil, I had to alter the hole in the pickguard.
Finish: flawless lushy cream that it's so beautiful I could eat it! Haha!
Gear: the P90 is on the bridge position of a Fender Strat Made in Japan around 1989/1990. The strings are Earnie Ball 0.9. The amp is a Fender Sidekick 100b with a Fender Bassman cabinet with two 15' speakers. The pedals are Boss CS-2, GFS Greenie, Boss GE-7, Sansamp Classic.
My history: I have been playing guitar for 13 years, played in a few rock bands, done countless garage sessions and recorded few tunes in studios. I have tried the Fender Tex-Mex (which I find organic), DiMarzio PAF Pro (a nice pickup, cuts through the mix, but it is not organic to me), DiMarzio Air Zone (lifeless, artificial and impossible to alter its sound), EMG HZ S1 (anti-organic, but extremely sensitive).
Styles: Besides acoustic fingering and clean tone ballads, I play classic rock from the Beatles and grunge from Silverchair and Nirvana.

I acquired a brand new pair of Mean 90 pickups at the shop of a renowned luthier from where I live (Rio de Janeiro, Brazil).
Because there is plenty of import taxes and the currency is different from the dollar, I can only say the Mean 90 pickups are way below the price range of the famous brands as Seymour Duncan, EMG, DiMarzio, Fender, Gibson and so on.

The finish is impeccable and the sound has a defined tonal characteristic when compared to DiMarzio, Fender, EMG and to really cheap pickups as the ones made in Indonesia and Taiwan in the early 1990's.

It seems to be very sturdy when I hold it in my hand. However, I can't fully test its construction quality because I got used to take good care of the equipment.

This pickup sounds to middy to me. There is absolutely no twang. Perhaps, it would sound better with a 6k output, but I'm not sure. I risk to say I know why John Lennon played a guitar with a pair of P90 pickups at the Roof Top Gig: because his amp was a Fender Twin.
I believe a trebly amp as a Mesa Boogie or a Fender Twin/Deluxe would help the Mean 90 to sound balanced, but I have not tested this idea.
I also believe it would be more suited to jazz than to rock n' roll.
I will give it 4 because it is hard to alter its sound when compared to the Tex-Mex.

enricoznn's review (This content has been automatically translated from French)" Excellent!"

GFS Mean 90
5
How long have you use it?
6 months
What is so special that you like most and least?
Plus: The sound the look and the price
The least: Nothing
Have you tried many other models before buying it?
Dream 90 but I am more convinced by this one, it's more than a fender
How would you rate the quality / price?
Unbeatable
With experience, you do again this choice?
It is clear that yes, there is the sound of a stratum in an intermediate position handle / middle and couples with a double as fat or crunchy paf pat it gives a very usable intermediate position