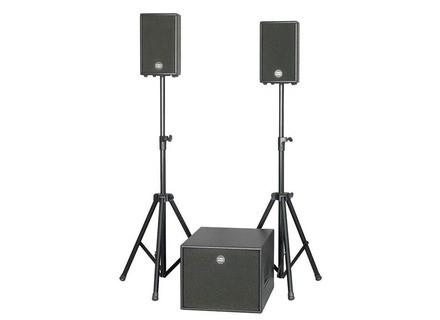 Power Works POWO
I use it for 2 years, and to solve the problem of weight, I took out of the box the amp.
The sound is clear, unlike what some say, even background, the sound is clean, after all depends of rglage .............
I couple with Alesis table and frankly was okay.
Good Videment is not a standard power, but I want to say one thing everyone who says;
"Not powerful 600w for"
Ben necessarily, it is not the sound ....... 600w, to read between the lines ......
Well, the powo 600w but does not;
1x300W for subwoofer
and 2x150 watts for satellites.
In fact if you prfrez there triamplification.
If we wanted
keep the satellites would require a maximum 2x150watts amp ............
Voil hoping to have some bright lantern ........; Cheers Zic.
Did you find this review helpful?yesno
»

Power Works POWO
I have this equipment since early July 2014
I had already used the HK 600 before.
I chose this set (900 € with feet and covers) for its compactness and performance that provided a good 38cm
for a meeting of 100-200 people. I am delighted, its sound is perfect to my expectations. for parties like the 80s and even trance, which is my favorite genre. Nb: I drop néammois acute on the table because it "sends big."
For evenings a little more "soft", I've added a BBE-482, but even without that, the powo is perfectly in line with his reputation. The quality of finishing and packaging are not left out either.
're Just going to be a bit critical: a slightly beefier and inlaid to avoid a possible breakout on / off switch (but see in time). for me, a note of 9.5 out of 10.

daddy dj's review (This content has been automatically translated from French)" exellent!"

Power Works POWO
5
hello, product purchased in December 2013, I've listened store, so convinced that I bought 2 kits so sub 2 and 4 satellites, any edge you still sound too pushed for at least 4 hours for so-called break-HP, the sound is very good for my taste, now that running is done I can say that AC sends wood!
I think the power is greater than that announced given by the manufacturer because before I had 2 pro and 2 sub pro 15 in peavey walking but also very powo is superior in terms of sound quality and power and for the price ca worth it!
to buy the closed eyes. if I say more oh yes treble are good but should be corrected on the mixer because I find powerful. I hope this lens on this review.

Did you find this review helpful?yesno
»
Read the 34 user reviews on the Power Works POWO »