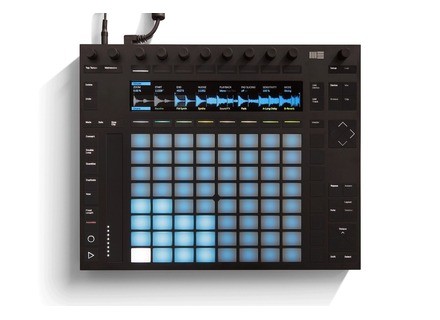 All user reviews for the Ableton Push 2

Ableton Push 2
5
Couldn’t resist !
I discovered Push with this version 2, so there's no way for me to compare with version 1.

The first thing that struck me was its weight – rather heavy for a controller. Seems sturdy.

Regarding the lights now (USB-fed only, so as to get it started slowly): on the video, the lights seemed pale, but actually the unit is well enough lit, everything is clearly visible.

Everything is a bit strange when you start using Push (just like with any other new device, by the way).
But everything is well-thought, especially the fact that the endless knob controllers are above the screen – which at first sight disturbs a little and makes you feel it will have a negative impact on visibility, but that’s not the case.
The way controls are arranged is very good, and the ergonomic aspect was improved compared with Push 1, especially regarding the way the knobs are placed above and under the screen. Colour codes are taken into account (those chosen for each track, for instance) and it’s easy and quick to find one’s feet.

It’s very intuitive, I don’t remember getting used that fast to any other device.

The fact that there are Master, Tempo and Swing controllers is really great... It doesn’t look like much, but as a previous MPC Renaissance user I can tell that even the lack of a jog data controller is soon forgotten.

Pads are really sensitive (and of course can be adjusted), still, they lack modulation controls (yet aftertouch in included). This area can be used as a touchpad – in a low resolution, of course, but it works.

Now, the screen: in my opinion, it has the best features of all controllers in this generation. I’ll tell you why:

Of course, like a lot of people, I first saw it a little gadget-like, then I started to realize how it contributes to making mixing a real pleasure thanks to the way the knobs are arranged, which contributes to make the device easier to read – unlike the MPC Renaissance (among others) which first was very hard to read, and even if the informations on the small MPC screen are sufficient you get used much quicker to working on the Push. In barely 2 days, I could navigate among settings naturally and effortlessly.

Visualizing waveforms on the large screen is great – the screen is entirely dedicated to editing waveforms and to the mixer, which was very well done in Live but lacked a direct control.

There’s some room for improvement too, thanks to the opportunities that this screen leaves open for the future (at least I hope so).
This includes the onscreen clip display (it should even be possible to have the pads blink at the end of a loop).
Some menus are more complex, such as those for controlling monitors or assigning MIDI or separate outputs, but that’s not so important as these settings are generally set during the session and almost all track datas are accessible.

Now, for the dark side of the Force... Well, frankly, it’s hard to find one. I believe to be rather unbiased and most often critical, but here, apart from the future VST integration...

The problem is that such a controller is all but cheap, but quality and ergonomics are here.
A lot of datas can be edited through the screen and controller. While Ableton required several mouse clics, everything is now directly accessible through the Push (apart of course from the fact it has a touchpad instead of a mouse

Adding several Live-dedicated controllers is a good point (for users – and so is it marketingwise, too).
Now, even if Ableton has more and more competitors (Maschine for its instruments and live orientation, Bitwig for its all-integrated ergonomics...) Live still has a great future ahead. We’ll see with the next version (which should be Live 10 – normally).

Improvements are still possible, especially with the screen which leaves a lot of possibilities open as it would be great to be able to do without any other screen at all and be able to use the Push with a screenless Mac Pro. The possibility to visualize Live’s effects such as EQ curves, filters and more really would be great.

The only cons I can think of right now is the integration of third-party VST, which is not optimized with the screen (Rapture and Dimension Pro in my case). Certainly the next Live will be VST3-compatible, but HOPEFULLY it will also work with still unrecognized VST2s.

I’m not disappointed with my discovery of Push2, and even if I have also been considering a second-hand version 1, Push 2 can be worth the effort (and extra money).
Still, I believe version 1 can suffice and also has great, well-thought ergonomics.
View price information
Did you find this review helpful?yesno
Cookies help us improve performance, enhance user experience and deliver our services. By using our services, you agree to our use of cookies. Find out more.