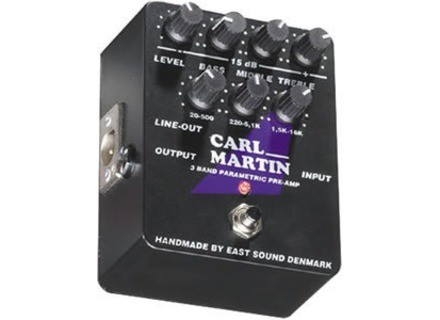 Carl Martin 3 Band Parametric Pre-Amp
5
This is a parametric EQ for guitar. It comes in pedal form and can be used between an acoustic guitar and a PA or amp. Since it's a rather flexible pedal it can be used on a lot of instruments, like electric violins and electric guitars as well as any other instrument that can be plugged in and requires some EQ adjustment. Since it's a pre-amp EQ it can also boost quite well. It is an analog pedal so it can't really be edited through a Mac or PC and it is not rackable as it is a pedal, though it does work effectively the same as some rack Parametric EQs would.

Using this pedal is pretty easy for more advanced sound technicians or musicians who know exactly how to work one. For younger or less experienced players, however, it might be kind of tough to grasp. Basically, the top four knobs control the overall effect level, the bass, midrange, and treble. There is a possibility of boost up to 15db. The bottom three knobs control the frequency curves for the gain knobs for bass, middle, and treble respective to their position. This will adjust the width of the frequency curve so that you can boost more or less of the surrounding frequencies. It can allow to give an overall boost of all the high end, or just in the small spot where you need it, depending on your preference. Thus it's a little more versatile than the higher end EQs.

This is one of the most transparent EQ/Boosters I've ever used. That's probably why it isn't advertised as a boost, as none of those pedals ever end up being that transparent. Anyway, it's a great pedal to use with acoustic guitar, as those can be really tricky in live scenarios. The pickups in them tend to pick up a lot of low end rumble and high end harshness, which aren't what we typically associate with the sound of acoustic guitars. This EQ is great for rolling those annoying frequencies off, and bringing up the good ones to bring out the warm sound of a real acoustic. This can be done similarly for an electric violin or other amplified acoustic instrument. I don't really have as much need for this on my electric guitar, but I still do use it sometimes just to make everything a little more perfect. It's transparent so it doesn't really affect anything negatively.

I like how flexible and useful this pedal is. It can really make an otherwise amateurish player sound great, just by virtue of cleaning up the tone. It's a little pricey but it could easily be worth it to make that acoustic guitar sound better. I'd avoid it for electric guitars as it's just too much money, but for people who find that big frequencies muddy up their tone and limit their expressiveness on the instrument, this EQ can really help you out.
Did you find this review helpful?yesno
»

Footswitch On / Off
size about 10/8/5cm PSU included

two pedals in one;
the preamp is very nice, very hot;
blues; crunch;
no metal
the equalo is effective despite its 3-band, less precise than 10 bands, it goes without saying ...

Very good little pedal;
intergrée the PSU is really convenient;
it can play on the clean channel of an amp of blues records with a single pedal ...