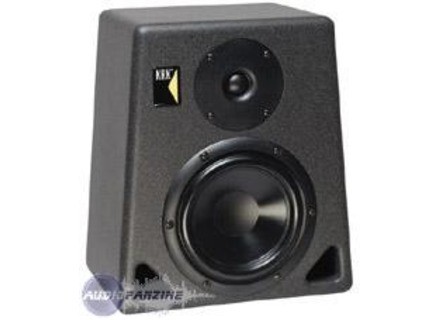 KRK RoKit
5
The KRK RoKits are a set of passive recording studio monitors that are no longer being made by KRK. They've been replaced by a few different pairs of active RoKit monitors, but these are the original RoKits. The monitors can handle up to 75 watts of power and of course do require this power from an external power amplifier since they are indeed passive. The monitors each have a 6 1/2" woofer and a 1" tweeter. I don't know when or for how long they were made for, but they're still pretty available on the used market if you're after them. I only recently used these for the first time, although I don't know what type of amplifier we were using with them - I'll have to check on this next time I'm using them...

The overall sound of the KRK RoKit is really impressive. They deliver and nice and big sound for a smaller set of monitors and are perfect for use in home studios, small or large. I recently used them in a band's home studio and really liked working on them as they seem to paint a pretty true picture. They do lack a little bit of low end presence, but that's always going to be the case with monitors of this size and if you're really after that super low end sound, it's probably a good idea to get a sub woofer anyway. These monitors are certainly suitable for mixing, editing, tracking, and whatever other applications you'd like to use them for.

I have to say that I'm a pretty big fan of the KRK RoKit's, as I like them more than the other newer RoKit monitors. I don't think that it has anything to do with the fact that these are passive while the newer ones are active, but I could be wrong about this. I like these because they can serve as a very nice and cost effective option for home studio owners. I wouldn't recommend these as your main monitors in a professional studio, but for smaller studios they're pretty much perfect. The best part about them is that they aren't too expensive and most people putting together a home studio should be able to afford them. Definitely check these out if you're looking for cost effective monitors that don't compromise quality!

The build quality is very good.
Very good dynamic
The sound is great but not 100% neutral. A bit more midrange and low lack of spectrum.

I bought used in 99 and I am always delighted.
The state is nickel, but I rarely shoot volume.
If I had to replace them, I would resume the KrK because I like them and my ears are made above.
For those who discover them, check your mixes on other sheets (also valid on KrK amplified)