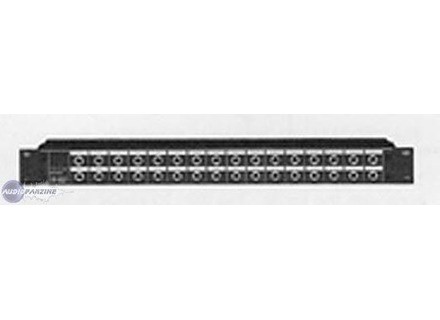 Tascam PB-32P
4
The Tascam PB32P is a simple 1/4" 32 point patch bay that can be used in any sort of studio setting. I've used the PB32P a bunch at a friend's home studio where he has it hooked up to some outboard gear. You probably know this if you're reading this review, but the main idea for a patch bay is to make easy connections between your gear so you don't have to get behind it each time to make connections. There isn't very much that you need to know about the PB32P to get started, as it simply has 32 1/4" jacks in the front and the back - the back for connecting your gear, and the front for making connection adjustments. It is also rack mountable and will only take up a single space in a traditional rack casing system. That's all you need to know when it comes to technical specifications, and as long as all of the points in the patch bay are working and not noisy, I can't see any reasons why this wouldn't do the job in any studio situation where you were looking for a 1/4" patch bay. Personally I do prefer a TT based patch bay as it just seems to be easier to make connections without noise problems. A 1/4" patch bay is fine but you'll need a bunch of 1/4" cables that are of decent quality and I've just found it easier and less expensive to get cheaper high quality TT cables when compared to 1/4" cables. Either way, for a home studio situation especially, the Tascam PB32P seems to be good choice as you can get them used for very cheap, although they are no longer being made. If you find one of these for a few bucks as they shouldn't be much more, pick one up for your home studio as it will make your life easier if you've got enough connections to worry about...

Tascam PB-32P
5
I've had my Tascam PB32-P for about a year now and it works great as a patch bay. Its as simple as they come in terms of a patch bay, 32 inputs and 32 outputs. For me, it is more than enough points for my small home setup. I love having it because I can simply patch my outboard gear rather than rewiring my whole set up. I didn't try any other models, but I'm really under the impression that all working patch bays can do the job. I looked into a Behringer patch bay but this was more easily accessible so I went with this one, although I'm sure the Behringer would have been great as well. The price is really cheap and I wouldn't bother spending more money on a nicer looking patch bay because this does the job. There aren't many features or anything, its just a standard 1/4'' patch bay. While it would be nice to have a few more inputs and outputs, since they are so cheap it really wouldn't be a problem to pick up a second one if and when I need it. I will continue to hold on to mine for as long as I need a patch bay.
Did you find this review helpful?yesno
»

Tascam PB-32P manuals and other files