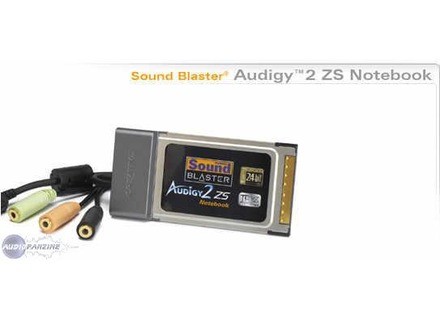 Anikinet's review (This content has been automatically translated from French)

I chose the MODEL for its small size and big performance from the perspective of computer music to any o. I lacked a more powerful sound card, and PCMCIA IDAL seemed to keep the advantage of few dimensions of the PC.

I mainly use virtual instruments and samples, I'm not making her (or only very rarely trs trs), which place a priori the criteria of the latency.

Installing a bit difficult, made in 2 stages.
I first tried to install the drivers from the supplied CD, but the program crashed directly to the CD release of the CD. began badly.
I Tlcharger then the drivers on the site of Crative and install, then retry the install from the CD and surprise, worked.
I continue the install, but the crash before the end of the installation process, with a carrment blue screen dump of physical memory. On a Windows XP SP2, as that has the balls not care.
At reboot, the Systm became unstable, I shall decide to reinstall over to see if by chance to plant again, and all ends well.
Since then, no worries of instability all goes well.
I prcise on the other hand that I have not figured out how to cleanly uninstall the whole mess at Creative Software ...

No worries of incompatibility is well intgre to the system.

Configuration gnrale a little messy, there are lots of small programs for each aspect of the config, instead of a single simple and clear interface. I regret the interface of my good old KX drivers ... : P

No manual, just a quick setup sheet. This cot feared the max.

The drivers appear to be stable, no problem a priori.

I mainly use Sonar and FL Studio, that perform well, except that FL Studio will not run in 44,100 but only 48,000 Hz.
I note also that the ASIO drivers provided by Creative are not paramtrables trs: one can only rgler latency. No choice of buffer size, for example ...

Latency: 4ms with small dcrochages not all teachers from time to time, so that I am generally satisfied.

Only problem size and plutt me: whistling parasite absolutely unbearable. I do not know of it comes from o, and I can not even what the rduire. It trsgnant when I work with headphones, but not with the speakers. What remains quite disabling for me ...

I use it for a week now, but can not argler my little hissing parasite problem, which owes me a little.

However, functionally it suits me well trs, it runs well, low latency Submitted.

This is the first MODEL I try on my laptop, and I confess dua be just because of the parasite. Otherwise the report qualitprix is ​​unbeatable, there is no cheaper in this format. The only other major default remains after the heaviness of Creative drivers: Can not install / uninstall quickly and easily. It is unfortunate to note that as usual, Creative is not able to dvelopper anything other than gas plants ...

I plan to try even when another card like the Echo Indigo example, if a little more CHRE purchase. If someone possde one and can give me his opinion, m'intresse!
Did you find this review helpful?yesno
»

fabricep68's review (This content has been automatically translated from French)

Creative Labs Sound Blaster Audigy 2 ZS Notebook
5
I was looking for a card with ASIO drivers for Cubase
and DSP.

Delivered on CD with drivers, the install goes without a prob with Packard Bell ...
I want to say that it comes with a ton of apps and tools.
really very interssant report quality / price.

After several hours, this card shows a stability of incredible
the asio a marvel of 3 msconde lattence and nothing! that says a better price??

Creative brand hard and sign a pro card without compromise!
I turn on Cubase and Reason, and no problem, it's all a wonder!
Did you find this review helpful?yesno
»

Johnny's review (This content has been automatically translated from French)

Yes no worries fingers in the eye, you metter the cd, and you r done next and 20 minutes after every nickel and walk if you're a purist you + to 'set in the software provided by creative.

Yes he is creative does things in this area.
latency I ever find out how much it was so exactly what I can say and when I plug my bass and I play a note from the mean on the conclusio so for me is: almost zero latency.
for the record I used a small mixer has 4 inputs and after and is a software like audacity or there may be several separate tracks.

I buy this card there just a year + fnac;
there is a microphone input and output, headphone mini jack 3.5
not in the PCMCIA card there is not a lot of choices and reasonably priced (€ 129 a time).
I find the notebook and an excellent map 24bits/192krs, biensu ^ r is not specifically dedicated musician, but that price worth it.
say that if I had the same budget so, if I had another I would take something of a + specific musical creation as emu, but it cost € 350 minimum
Did you find this review helpful?yesno
»