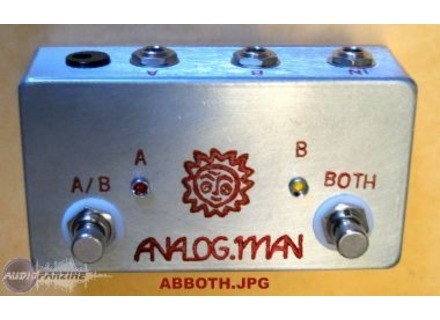 Analog Man A/B/BOTH BOX
5
This is a box that I have quite frankly been looking for for quite a while. It is a variation of the typical A/B switch, which will switch between two outputs (will basically allow the player to switch between amplifiers). The cool thing about this one, however, is the fact that it will let you switch not only between the two, but will also give you the option of playing both amps at the same time. This is amazing for people who have a dirty sound that they like from one amp, and a clean from the other, and wouldn't mind combining the two for leads. This isn't the only application, but it's the one that I use the most.

The setup of this pedal is pretty easy. Just plug your guitar in, and run it from A to the first amp and from B to the second. The hardest part about setting this up is just having to set up two different amps. There's not really a need for a manual as the pedal is pretty basic.

I can't really comment on the sound quality of this pedal, as that's not what it's about. The pedal doesn't have any qualities of sound of its own. I will say that it doesn't really color the sound of the guitar or amps I'm using at all. This is a good thing.
However, I'd be remiss to not mention how many tonal capabilities open up with this pedal. There are simply so many options between tones that you'll have after using this pedal. If you need an enormous wall of sound than two amps playing simultaneously will get you that. Not many other boxes can let you do that. Not to mention that if you don't necessarily want both at once, having the option to switch between amps can give you a wide variety of tones. Having a great clean Fender twin going on A, with a nice Crate Blue Voodoo on B giving you great distorted tones will be awesome. Throw a Big Muff after the A output, and hit BOTH, and you'll have a monster lead tone. The possibilities are endless.

I like the fact that this pedal can give me sounds that I have never been able to accomplish before. Quite honestly there isn't anything negative to say about it. I think that for the price it's worth it, and the customer service is top notch (though I haven't needed it). I highly recommend this pedal.
Did you find this review helpful?yesno
»