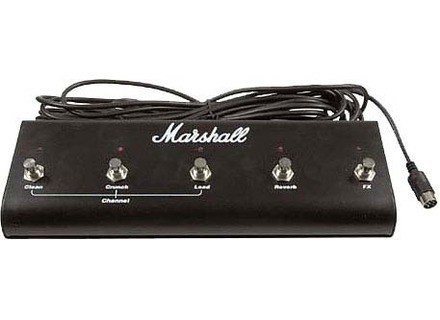 All user reviews for the Marshall PEDL10021 TSL 5-way Footcontroller

Marshall PEDL10021 TSL 5-way Footcontroller
1
Let me start off by saying that I don't actually own a Marshall TSL. I did though buy this switch to rewire to work for my Peavey Ultra, which used to have a tiny footswitch that was much too small to have three buttons on. Anyways, I bought a non-working TSL footswitch off of Ebay, and when I got it I was amazing by how cheap this thing was made.

Overall, I have to say that this has to be just about the cheapest footswitch ever made. I just can't recommend that you buy this if you have a TSL, though I'm not sure if anyone else makes a TSL footswitch besides Marshall. If I owned one I would definitely be looking for somebody who did though. It really is no surprise to me at all that this thing stopped working, I'd almost bet that somebody stepped on or rolled a cart over the cord and killed it just like that. And oh yeah, did I mention that you get to pay around $150 for this footswitch? For that kind of money a footswitch should stand up to many years of gigging, but I can't imagine this one lasting any more than a year.
Did you find this review helpful?yesno
Cookies help us improve performance, enhance user experience and deliver our services. By using our services, you agree to our use of cookies. Find out more.