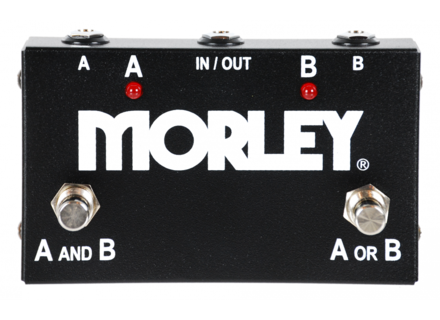 Morley ABY Selector / Combiner
I bought this pedal because I was running two high gain heads and wanted to split the signal. Seems easy enough at first, I've done it more effectively just running two outputs from my Boss TU 2 tuner.
Wrong! It's not that simple. Or, if it is that simple, then Morley has no idea what they're doing. Running two heads on this ABY, whether both were switched on or not, created some insane ground loop noise. If one head wasn't on, I got a lot of low volume bleed through on the other amp, but the noise alone made it completely unusable. I tried finding some scenario where this would work, but I can only imagine that the greatest part of the market for these pedals is getting folks who would like the ABY option, but can't justify the higher price tags to buy it once and then be stuck with it.
On top of being totally unusable, this requires a battery (no adapter option) if you want to use the signal lights. They're not necessary, but they're there and you'll probably want to use them. But to get the battery in, you have to take the entire chassis apart. No easy in, no easy out. This could easily lead to knocking something loose inside the pedal if you had to change the battery.

On the flipside, it's pretty doubtful that you'll want to keep this pedal around long enough to need a second battery.
Radial makes an ABY that's almost twice as much, but worth every penny. When you realize that an ABY can be as simple as you might think it should be, it's almost criminal that an option as worthless as Morley's stays on the market at all!

heads on fire's review"Nice utility box that all musicians should have."

Morley ABY Selector / Combiner
4
This box isn't fancy, but it sure is useful. It is a durable, metal-housed pedal, with two stomp switches, and three 1/4 jacks. The jacks can be used as two in and one out, or two out and one in. This can be useful in going between two amps onstage (or both at the same time!), or going between two guitars in one amp, for quick changes without unplugging. Very cool to do a switch between a clean and dirty amp, or if one has a couple of different tunings to use throughout a set.

My personal favorite use for this pedal is in the studio. I will run one output to a guitar amp, and the other output to a direct box. The amp is miked, and I also have the direct signal to reamp as desired. Basically I'm just splitting the signal to two sources, but it is sure handy to have a box be able to pull it off cleanly.

The best part is that the pedal requires no battery to operate. It does take a 9v battery if LED status is a necessity, however. I like to have lights showing me what's going on, so I use a battery, but it's nice to know it won't cut out in the middle of a gig if the battery dies.

As far as fidelity is concerned, I feel that the sound quality is slightly compromised as compared to the regular signal - I noticed a decrease in volume about 3db between using this into an amp and running straight in. That isn't terrible if running a buffer, but it is something to be aware of.

Overall, I recommend all musicians and sound engineers to keep one of these in the toolkit - it might just save a gig or session someday.

Morley ABY Selector / Combiner
3
The Morley AB switcher is a device that lets you split your signal into two outputs. This is handy for running your guitar into two amplifiers and selecting between them or combining them both simultaneously.
The unit runs only on batteries. It would have been nice if powering the unit by an AC adapter was an option.

Two red leds indicate which channel is selected, A or B. or both.

Tone wise, this pedal isn't terrible, but there are much better units out there made by companies like Whirlwind and Radial(though they cost a bit more too).
When running into two amps and using only channel A or B separately, there isn't much noticeable tone loss, only a bit if you compare your sound with and without it. Most players probably won't be picky enough to notice it however.

The tone loss and volume drop issues occur when you select both channels at once. One of the amps usually suffers from noticeable volume drop, and the "balls" of the amp are taken away also. It has a similar effect to rolling down the volume and tone knobs slightly on the guitar, or like your pickups are weaker when both channels are engaged simultaneously.

That said, it's still a useful tool for running a multiple amp setup, where you only use one or the other, but not both at once.
If you want to simultaneously run two or more amps get a proper unit by Radial or RJM.

There are a couple other cool uses for this pedal. If you are a user of effects pedals, you can create an "effects loop" of sorts by running one output into a chain of pedals, and then splitting that signal out of the Morley and turning on or off a certain effect or effects.
Overall this is a cool little switcher for messing around and experimenting/comparing different amps side by side, or creating effects loops. However if you want to properly feed your signal simultaneously to two amps, you need a proper switcher that won't cause phase issues or tone loss.

Morley ABY Selector / Combiner
5
The Morley ABY Channel Switcher is a simple A/B box for use in the studio or on the stage. It's a simple pedal, with 1/4" connections for the A & B channels as well as for an input/output jack. It then has two buttons - one for choosing between the two channels and one for using both of them at once. We've got two of these boxes at the studio where I work, and they get used for a variety of purposes. The main use for this around the studio is for sending a single guitar to two separate amplifiers, which is great for both stereo guitar recording and for switching between two different amplifiers at the push of a button. It can also run the other way if you're looking to run two different signals into one. Another recent usage I had for this was for a talkback microphone inside the live room. I hooked up a mic into one end of it and had the other end open, giving the players in the live room a chance to switch on their talkback when needed to speak to the other players in isolation rooms. This isn't exactly a traditional usage for the Morley ABY Channel Switcher, but it's valid nonetheless and to me really outlines the versatility and flexibility you get with a box like this. To me this box sets itself apart from other A/B boxes simply by being sturdy and super easy to use. There's absolutely nothing on here that you won't be using each time you use the pedal. It's also not very expensive for what it is when you compare it to others like it. It's probably not the cheapest, but more times than not it's going to be worth it because it's such a solidly built box...
Did you find this review helpful?yesno
»
Read the 18 user reviews on the Morley ABY Selector / Combiner »