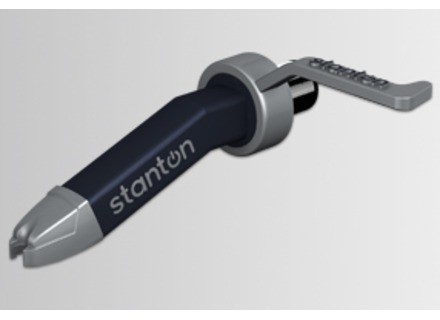 davv's review (This content has been automatically translated from French)

Stanton Magnetics Groovemaster V3
4
I have a few days

What I like most: the sound, the possibility to run two programs, the look

What I like the month: holding back the plateau capricious beginners

Excellent price quality ratio seen sound, elliptical diamond, two diamonds supplied replacement, and wear-resistant vinyl ad (that's why I chose this MODL)
Exprience with these few days if this continues as is, I would do the same choice. I mean it must run in all cells but those in particular. When you put them for the first time on the stage and that was unfortunate enough to touch the plate a little too far they jump. According to Stanton, that I should contact to let at least three days poses on the disk (color plates) so that the cantilever takes place. And if we can, according to Stanton and also according Get Down, they must run a morning on a disk (or in increments of fifteen minutes on an endless loop). I did not believe too but we reconnatre that since one and a half that I myself Atlee, your exact is the little jumps on hard uss and / or sailing (not as a nag to go either, eh!) and not jump on new discs for a pitch a little faster. Good resistance to scratch disk for prvus break beat.
I think when I finish running it will go well trs (j'diterai).
That said it all but cells scratch. But the sound is really excellent, the voices are clear and I understood the lyrics of some songs that taient obscure to me until l. The sound is balanced and lacks nothing.
I have not seen put forward particulire of surface noise as I feared with the elliptical.
In short: I'm happy for DJ use and for ticket costs. I believe they can make excellent numrisation cells as well. And considering the price, a will.

PS: I recommend the bearing force of 3g (I think the whistling as they go nickel 3g 2g hang a little, if someone can tell me why ...)
Edit: I lowered the rating because of some sibilants that are not terrible and passing on the nickel SC35C or the om pro.

Other categories in Accessories for DJing