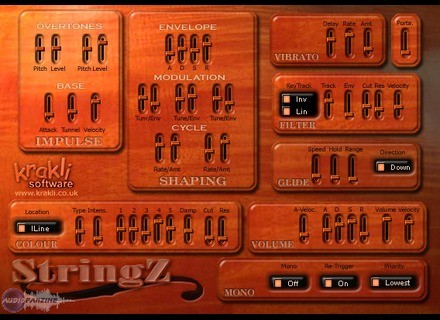 All user reviews for the Krakli Software StringZ [Freeware]

Krakli Software StringZ [Freeware]
5
Krakli StringZ 2 is one of the unsung hero’s when I comes to developing VST’s. When I saw they made the StringZ 2 I knew for a fact that I was going to download it. I really didn’t have anything to lose because it is completely free. StringZ 1 was the first version of this that came out and it was great, I didn’t think they would come out with a StringZ2 though, as soon as I got word on it I immediately downloaded it and installed it. The layout of StringZ2 is better than the first version and it is better than any other Freeware that I have seen. Krakli has really taken the time out to create a great interface, I cant believe they still made it for free though.

It worked perfect on my dual core processor Windows 7 64 bit PC. The Ram was not an issue because Krakli StringZ 2 doesn’t not use a lot of CPU. Installing it was very quick just like installing the original version of the StringZ. I still have StringZ on my computer along
with Stringz2 and I use them both to this day. The software is very stable, there have been no issues installing or using.

StringsZ2 seems to have some more authentic sounding strings that sound less "synthy" than they did on the first version that came out a while back. That is a good thing and a bad thing because I do love to have synth sounding strings, that is the only reason I keep StringZ1 installed on my system , other wise I would have took it off when StringZ2 came out. I am happy though I downloaded this and knew I would love it before I downloaded it. If you are in need of some good strings why not download this freeware. The quality of this VST is outstanding, and its easy to use.

Tonka's review (This content has been automatically translated from French)

And a tip: try shots modulation wheel on a sustained note!
Did you find this review helpful?yesno

H.Noury's review (This content has been automatically translated from French)

Krakli Software StringZ [Freeware]
4
Installation is as usual: one of the Zip-file, then dragged into the components in the "VST" Cubase. The manual is clear, complete, except that the instrument is complex ...

No problem, the processor suffers little.

I have used three or four weeks this instrument, trs trs original and fun. This gives him the rub synthetic string sounds, for some relatively ralistes. The sound has a color mark trs, trs original. The instrument often shows trs expressive.

I really like the synth as it is unusual, pretty, and thundering trs. I am a big consumer (and producer) VST freeware, it is quickly input into my favorites ...
Did you find this review helpful?yesno
Cookies help us improve performance, enhance user experience and deliver our services. By using our services, you agree to our use of cookies. Find out more.