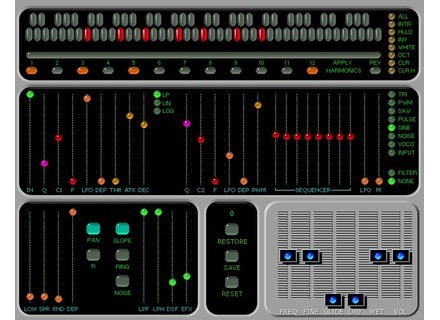 Richard Wolton 4ormulator
3
The Richard Wolton 4ormulator is a free vocoder plug-in that is only available as a Direct X plug-in for Windows. It's definitely an older piece of software, as it's even been a number of years since I used it myself, and it seemed old at the time. I'm not running it any longer since now I've got Pro Tools on a Mac, of which this is not compatible. Since it's been a while, I can't say that I remember the process of installing it all, but I can't imagine that it was too hard to download it free and install it. Learning how to use the software is a bit harder however, as it's definitely got a unique looking interface that's unlike most other vocoder plug-ins that I've seen before. Once you do break it down however, I think you'll find that while somewhat convoluted, there's a whole lot of control available to you here. I don't think that a manual was made for this...

Although I'm not running it any more, when I was running the Richard Wolton 4ormulator it was in Cubase SX as a Direct X plug-in. I was running it on a Hewlett Packard Pavilion dv8000 lap top with a 3.0 Ghz processor and 2 GB of RAM. I honestly didn't use this plug-in all that often, but when I did I can't say that I remember ever experiencing any performance problems. It's definitely worth noting that I don't think I ever had a need to try more than one at at time.

For being free, the Richard Wolton 4ormulator is definitely worth having. The problem is that not too many people will have compatible systems to use it on! If you do have a PC and a Direct X compatible platform to run the plug-in on, I think you'll find that it's useful, but not outstanding by any stretch. It doesn't have the most realistic or warmest vocoder sound, especially by modern software standards, but it gives you a lot of room to mess around and has a lot of sounds that would definitely not be recognizable as a vocoder - it's really what you do with it. There's no harm in trying this software if your system will allow, as it's definitely worth seeing what it's about for yourself!
Did you find this review helpful?yesno
»