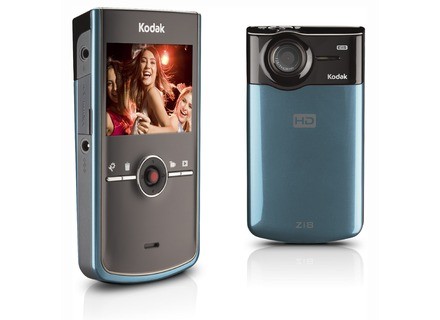 Kodak Zi8
Had to take a second look because did not expect to see this on this site since it had been discontinued rather quickly after release.
I actually firstly bought this to catch the thuglets that were vandalizing cars in carport, bought a small tripod, 32 GB SDHC memory, and an external mic and a remote control with basic on/off function. You can place up to a 64 GB SDHC memory card in it. Very easy to use but learned quickly to purchase a few extra batteries to have charged for a quick swap as about 2 hours is it on battery. Like another reviewer stated and like ALL pocket video cameras, it needs good lighting but did not buy it for night vision either. The optical zoom works well but best to use sparingly because it tends to make picture grainy. However, I learned that if you purchase the "HD class 10 SDHC memory card optimized for HD video/audio", which was about $64.usd two years ago,that graininess from using digital zoom is not as pronounced. Color is great and comes with everything needed to hook up to an HD TV and has both USB 2.0 and HDMI on device.
I now plan to use it to record some home synthesizer studio based videos and upload to youtube because that external mic input works great on a 1/8" line at low gain straight from mixer or audio interface.
My only complaint and is a valid one, is there's no cover for the lens as it is always open and exposed. You would think like my kodak digital camera, it would have built-in open and close but they did that on the i9 model that replaced it. The software is all within video camera and as of last week was able to download an update even though kodak seems not have the market presence it once owned anymore.The editing program lets you take single frames, effects, merge,edit, and even add music. These files are easily dropped into Sony Vegas or any video editing program as well. I am glad I also purchased silicon skin for it and the lanalier mic with generous discount savings when first purchased it. I am probably one of the few on planet that only has a plain old cellphone that is hidden away in car only to call roadside assistance if ever needed as being recently disabled/retired military veteran, have absolutely no need to a so-called "smartphone" but can see with everyone having cameras and video ability on their phones, where the Flip and this product perhaps lost it's isolated revelance.
I love this thing and with a 32GB HD SDHC card, can record longer than the batterries would allow and to my knowledge and research at time of purchase, no ONE else had the external mic option other than the Zi8.
Oh yeah, I CAUGHT the thuglets and have since moved to a very safer area of city because the thought was crossing my mind of how silient a crossbow would be from same window the Zi8 captured them from...no no....LOL

Kodak Zi8
The Kodak Zi8 is a great camera for semi pro to pro recording projects. I claim pro simply because if you have this camera in the hands of a professional in the correct environment blocking his or her shots correctly then you won't be able to tell the difference of camera switching through the short film/movie/commercial that has been shot.

This camera (at the time of purchase) was not very expensive but since it's been discontinued most vendors have jacked the price up to $400-$500 (which is ridiculous) you can get a DSLR for that amount of money.

The Zi8 supports external microphones unlike this rival (Flip Ultra HD). You'll want an external mic if you plan on shooting quality material. No one wants to see good video laced with bad audio.

I personally think the video quality looks better on it's LCD screen than it does when transported and uploaded to something youtube. The Flip (for some reason) looks better than the Zi8 (but not by much) both cameras are exactly the same if you're in the right lighting environment.

The Zi8 is not as good as a dslr, it sucks in low light conditions and as with any portable camera (Vado, Flip etc) it needs GOOD lighting.
File storage consists of an SD card, to some this could be a problem for other it may not. I know I personally like the idea of the flip styled USB are when it comes to transferring my files over but not ever company offers that.

I feel the Zi8 works best at a range of 10 feet or less (depending on what your shooting at).
I would stay away from the digital zoom as it will make your video grainy. If you have to zoom in simply move closer.. Don't zoom.

If you run into a Zi8 for less than $150, I would grab it because it's worth the money.

Lastly, there are a lot of vendors who offer attachment lenses (which will improve the cameras video clarity)

Kodak Zi8
4
The Kodak Zi8 is a must have pocket camcorder in full HD. It can record in 1080p full HD at 30 frames per second. Or you can record in 720p at 60 frames a second. I prefer using the 720p at 60 frames a second because it’s a smoother picture and if you are jus using it to record videos for youtube you don’t need full HD. You will only need full HD if you plan on putting this on a big HD screen. The camera is very sleek and you can fit it in your pocket or wherever. Its not big and bulky like other “pocket” recorders. This will give you a great HD video in no time!

It charges up pretty fast, I think it only took me about an hour to go to full charge once it was dead. It stores around an hour worth of video, and the on the camera mic is pretty good as well. Most pocket camcorders have mics built in on them but the quality is extremely poor. Not with this Kodak Zi8, you get great video and audio.

Overall this is a great camera at a reasonable price that we can all afford, everything is in HD now a days so you will need an HD recorder to capture all of those quick moments that you want to capture. This is the device you need, no setup or even manual needed. Just turn it on and press record. The downfall of this camera is that in low lighting levels it struggles, but most pocket HD recorders struggle in low light. So if you keep this in good lighting like outside during the day, you will have a high quality HD video when you are done shooting. Really can beat it, its definitely worth a try.

Kodak Zi8
4
Able to shoot in 1080p at 30 frames per second or 720p at 60 frames per second, the Zi8 toy is a small wonder: the images it produces are of relatively good quality color side, although it is obviously in difficulty in low light conditions (lots of noise when it is not complete darkness). In any case, outside, it's really not bad ...

Everything above is automatic, with the focus to white balance, which makes it extremely easy to use. His real weakness lies in its stabilization (very effective), its lack of optical zoom and low autonomy: it must charge after 2 hours away ... Normal faults on all PocketCam.

But the big plus of Zi8 compared to competition is the fact that it embeds a headphone jack and a stereo microphone. It thus becomes interesting to interview for example, that the dowry of a microphone or video that uses a good old handheld microphone ...

Note that exists for the remote device.