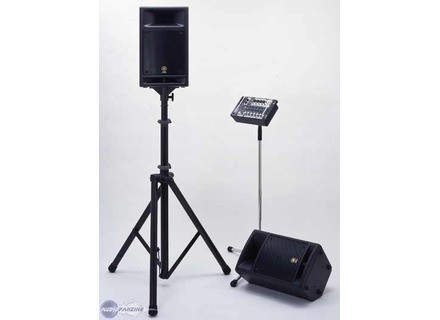 Yamaha Stagepas 300
4
The Yamaha Stage Pass 300 is a very usable, portable, small and complete PA system, best used for vocals-only solo or group acts needing no more than four dynamic microphones. Venues it is best used include small coffee houses, house concerts, smaller houses of worship, and outdoor events where attendance is less than 75 to 100 people, or up to about 200 people if using the Stage Pass 300 for mostly spoken voice.

clean sound, and easy to use controls. It's 40 pound weight (carry case and accessories not included) make it light enough to be carried, if with some difficulty, by most reasonably healthy people, although one is a bit off-balance with the Stage Pass 300 on one shoulder and nothing on the other, and balancing it with another 40-pound load on the other shoulder would be too heavy for most folks to carry any distance at all. Yamaha has done what it can, for the most part, to keep the unit's weight manageable, using poly-carbonate (reinforced plastic) cabinetry for both speakers and the PA mixer/amp unit. It appears not much more could be done to further lighten the basic "three boxes."

the Stage Pass 300 produces a (presumably) clean 300 watts. The 10% THD reported in Yammie's specs is not objectionable, so if you need to push it to it's max, you will not be punished by horrible distortion. The power amp and speakers seem to be well-matched (as you would expect, from a 3-box PA, and from Yamaha

I have not heard speaker-destroying amplifier clipping, or self-destroying speaker distortion, even when the controls were turned to full.

Tapco established the standard for non-expert mixer controls more than 30 years ago, doing away with both mic gain and input-channel slider in favor of a single "output" or "volume" knob, and Yamaha wisely follows that lead with the Stage Pass 300. Each input channel features a mic and line input, a switch to toggle between the two (but no LED to let you know which is chosen, and the push-on/push-off button lacks enough throw to give the operator adequate visual reference, a two-band EQ with up to 15dB of cut or boost for "treble" and "bass," a push-button to turn "reverb" on and off for each channel, and a level control marked for "unity" gain- marked with a hash mark, but not identified as "unity. A pro sound man would know what this is, but most amateurs who are the Stage Pass 300's core user might not. The EQ controls have a center detent, but the level control lacks this feature. Pity. Four of the input channels have XLR mic inputs (and thus, pre-amps

the last two are stereo but lack XLR inputs. Input channel five has both TS and RCA inputs, channel six has RCA only. I dislike that cost-saving option- I like for EVERY channel to have mic capability, but that's must me- the TS/RCA inputs are actually often a plus for it's intended use- solo or small-ensemble acts can easily plug in a CD or MP3 player or a backing-track into either of these channels. Yamaha suggest channel five could be used for a keyboard, but the 10-inch speakers may not be able to handle the lower frequencies of an 88-key keyboard, so be careful. The output side of the mixer/amp is also noob-friendly, with only monitor out, reverb (global

and Master Level knobs and a speech/music push button. Both main and monitor output jacks are 1/4" TS, and it is easy to plug in a cable to the wrong out, but at least there is a visual difference- the main speaker outs are black plastic, the monitors are chrome metal. Actually, it should have been the other way 'round- the mains will get much more use, and plastic jacks are much more easily damaged by force put on the plugs. RCA jacks are provided for Tape out, and a single LED level meter is included, too- although it is of questionable use, as the Stage Pass 300 includes an output limiter- I have never been able to make this thing distort, even when the top-most red LED was lit often. The UPC AC input is on the face of the mixer, which seems odd until you want to mount the mixer/amp in the back of either speaker cab- a very cool feature, as you have more portability (only two boxes to carry and setup

and less room used. If the AC input were on the back or side, such mounting would be impossible. Both speakers have the same cavity (they are the same speaker, not L and R mirror images of each other

so the mixer'/amp can be mounted in either; a filler plate fits in the other one to make for a small storage area for the user manual and perhaps a couple of microphones.

The speakers are well-matched, as mentioned, but lack pole-mount cups. Additional-cost pole mounts must be bought and installed to the bottom; these are ugly, lack any adjustability, and take up room in the canvas carrying case that could be better used for cables and such. They are not cheap, either. This could have been done much better.

All those features make the Stage Pass 300 easy to use and it turns out good sound. It begins to fall down on the job when you ask too much of it. Although the 5th channel's TS inputs can be used to slave a bigger mixer board to the SP3C, the user will want to limit these added mic inputs to about two- beyond that and things get muddy, fast, regardless of the room (or lack of a room, if used outdoors.) This cute little thing can only handle so much. The system has a strang 6-ohm operating impedance, you could probably use a pair of 8-ohm speakers (say, if you wanted 12-inch woofers for more bass

but Yamaha would not comment on this, and you should NOT daisy-chain speakers- the resulting speaker load would be below the Yamaha-recommended 6-ohm load. This wierd 6-ohm load also means that if you blow a driver, you must replace it with one bought from Yamaha, which will no doubt make for a VERY expensive day (see below.) You can easily expand the output of the system by using the monitor outs and a power amp/speaker combo, or powered speakers.

We've used the Stage Pass 300 for about 4 years, for Sunday morning services- a diminutive, soft-voiced interim minister could not be heard without, and the congregation has become dependent on it, even though the called minister has much better projection and can do fine without it. We's also used it for a number of rock, jazz or pops combo concerts, in the same 100-person space, and on occasion outside for the same kind of groups' picnic concerts. It has performed well, when not asked to do too much- too may added mics overwhelm it, and it does poorly when asked to reinforce instruments already amplified, like electric guitars. Yamaha put "only" four mic inputs on it for a reason- respect that limitation and you will be fine. The SP3C does not feed back badly or too easily- good thing, with it's basic-as-it-gets EQ. Just keep the speakers in FRONT of the mics, and you should be okay.

If there is one fly in the ointment, here, it would certainly be the cost of service parts. This one developed a noisy, inefficient cooling fan (there are two in the unit

and a replacement from Yamaha was almost $70, plus shipping. I found an exact duplicate, only lacking the plug (I spliced the plug from the original fan) for $12, locally. I don't EVEN want to know what one of those 6-ohm (and thus probably proprietary) drivers or horns would cost.

Small, thoughtful features like the mic-stand mount (also optional) and ability to mount the mixer/amp in the back of either speaker make this a versatile little PA, much more so than the basic 3-box PA's often seen. Whether it is worth the extra $200 or so it costs is a question the user will have to answer for him or her self.

We rarely move our ST3C very far, so if I were making the original buying decision (or had it to do over

I probably would have bought a not-so-portable PA that has more inputs, power, and features, but this one has served us well. I prefer it's design over the "clamshell" type portable PA's from Peavey, Fender and others- If you need or appreciate the portability, it is a good bet.

parispal's review (This content has been automatically translated from French)

well everything is on topic! I have not found in the technical doc RESPONSE product or on diffrentes pages that talk about it, and who take over the majority doc manufacturer.

So there he has a phantom power on the Yamaha STAGEPAS300. And we can connect a minidisc output?

parispal's review (This content has been automatically translated from French)

well everything is on topic! I have not found in the technical doc RESPONSE product or on diffrentes pages that talk about it, and who take over the majority doc manufacturer.

So there he has a phantom power on the Yamaha STAGEPAS300. And we can connect a minidisc output?

Yamaha Stagepas 300
5
Everything has been said or near this small sound that my taste does a very good taf and especially at the level of sound quality.
I would still react to comment from the guy who left a star and a half because in the lighting, there has a little unpleasant noise ventillo.
Indeed, it's a bit boring, but still it's not rocket science: it has only the right to turn down the knob for the overall grand max 2 min (s time to grant), and then then it's good, you have a clear sound until the end of the night.
In fact, I 'use it now for 2 years for small benefits. It is nickel.

Did you find this review helpful?yesno
»
Read the 37 user reviews on the Yamaha Stagepas 300 »

Yamaha Stagepas 300 manuals and other files