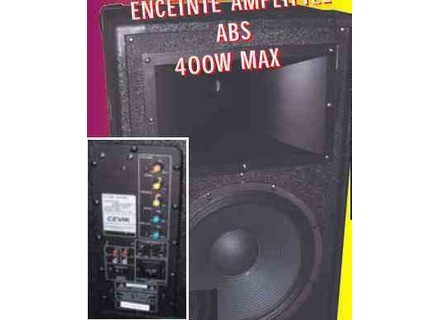 cheyenne-toulouse's review (This content has been automatically translated from French)

Cevik SP12
4
I bought two amplified speakers Cevik SP12 on a promo, and all that I do not regret it! level value, really unbeatable: € 129 speaker!
150W rms power level to 800W peak in (a + a cone woofer 12 "), membranes strong a priori
His level, made very correct (for that price so low!) In all frequencies, a bit of breath but perfectly acceptable for the stuff for non-professional
Level design: at this price point is not molded ABS, but it happens (they have a guard unlike the photo).
Standard connectors: input and output RCA stereo, 2 mic inputs selected (with reverb Integrated microphone inputs); little lacking: no xlr, feed it can easily tinker!
Level settings: potentios for volume, 2 band eq (bass, treble), reverb and volume microphone.
The big advantage of these speakers: the unbeatable price, the sound very neutral, without browning, which can be used both for the small sound system and as monitors for mixing. Personal I use also as a floor for my group.
Least one small: no XLR input (but easy to hack), not very design ...
Did you find this review helpful?yesno
»

Avtec's review (This content has been automatically translated from French)

Cevik SP12
1
J bought this house on EBAY is 120 euros + 20 euros postage c is cheap but do not worry you ca not worth more than the opposite.
this place does a "pressure can" correctly that provide low volume ... high-volume distortion!! no serious no return!! trs heavy for rendering, and especially ill-conceived at the amp on the back part of the forum ... this one n not being encatr back in the enclosure, all the buttons and rglage dpassent may pose problem for the transport.
C is not short ..... terrble c is really a low-end product for use ....... adconseiller pro!
Did you find this review helpful?yesno
»

Cevik SP12
5
So there really disagree with the opinion of "Avtec" ...
Indeed, given the price, I expected something really better than average, but I was very surprised at the quality of sound reproduced by these speakers!
Contrary to what has been said, I have found no shortage particularly in the lower, I even found that the speakers had made a lot better than some other, better-known, I own!
The connection is complete, and although the picture is not recessed into the enclosure, it seems relatively strong (I had no desire to break into several years of use).
Question power, do not worry, these are the facts: I have several evenings with sound up to 150 people and even the lottery twice in a school with about 400 people, and all that with just two speakers (and the volume just over half !!!).
I had no problem with distortion at high volume ... I think the problem is rather Avtec future losses in a poor quality wiring used to connect the speakers.
Plus: the built-in reverb effect on the mic, useful for quick and easy animation of fun!
In short, it's been over two years that I use and I'm always amazed at these speakers! an investment that I would do without any problems! € 130 for each new, why not??
Of course, it's ... Made In China but it is well worth the Behringer manufactured in the same place, and for less!
Did you find this review helpful?yesno
»